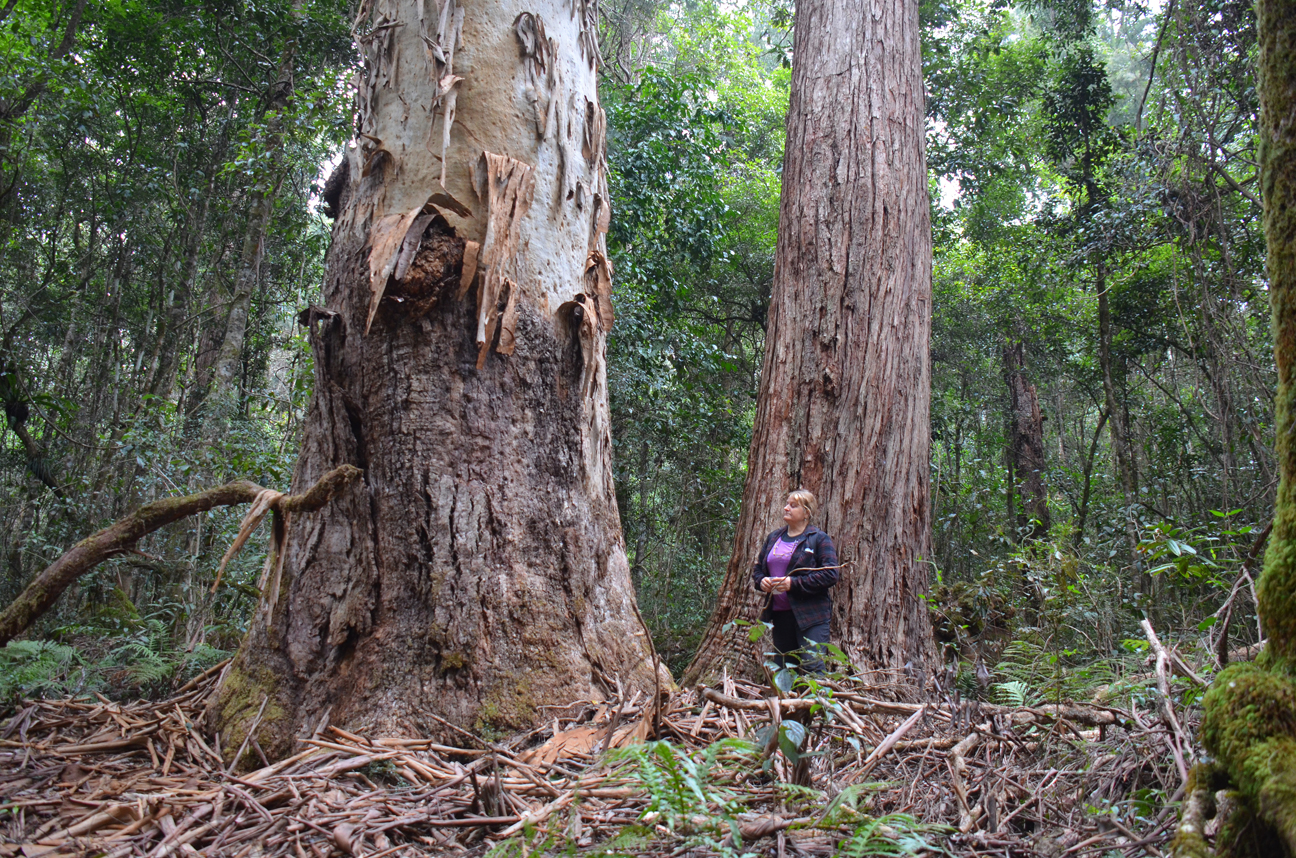 The community fought hard in the late 1970s and early 1980s to protect rainforest and in the late 1980s and 1990s to protect oldgrowth forests. These were mapped in the Comprehensive Regional Assessment under the supervision of all agencies and key stakeholders in an open and transparent process involving an Old Growth Expert Panel in 1998.

Those oldgrowth forests on State Forests, above high thresholds for a combination of ecosystem, fauna, flora and Centres of Endemism reserve targets (called 'summed irreplaceability'), were identified as High Conservation Value (HCV) Oldgrowth and included in informal Reserves as part of the Comprehensive Adequate and Representative reserve system in 2000. They were counted as contributing to reserve targets for oldgrowth, forest ecosystems, and national estate in the 2000 Regional Forest Agreement.

Mapped HCV oldgrowth forests in the Upper North East are also legally protected as a heritage item under the NSW Heritage Act 1977. An additional 20,000 ha of oldgrowth was included in Special Management Zones in 2003.

The outcome from these multiple revisions is that of the 103,000 ha of protected oldgrowth on State forests, in the order of 58,600ha (57%) may be wiped from the map and made available for logging, with some narrow strips and patches retained within these areas. Of the 81,567ha of mapped rainforest in the order of 50, 571 hectares (62%) of mapped rainforest could be opened up for logging.

The justification for this is a claimed shortfall of 8,600 cubic metres of high quality sawlogs per annum on the north coast. This is fraudulent as the contribution of hardwood plantations to yields was removed from the calculations, turning a claimed surplus into a deficit. The claimed need to log rainforest and oldgrowth protected for the past 20 years is based on a lie.

Forestry Corporation's yield projections are so grossly and deliberately over-stated that once oldgrowth logging resumes, claims of yield shortfalls will be used to log ever-increasing areas of oldgrowth to avoid compensation claims. This does seem to be the deliberate intent.

NEFA intends to focus on this issue in an effort to stop oldgrowth and rainforest being opened up for logging.

Mapping of Oldgrowth and Rainforest on the chopping block to be logged. 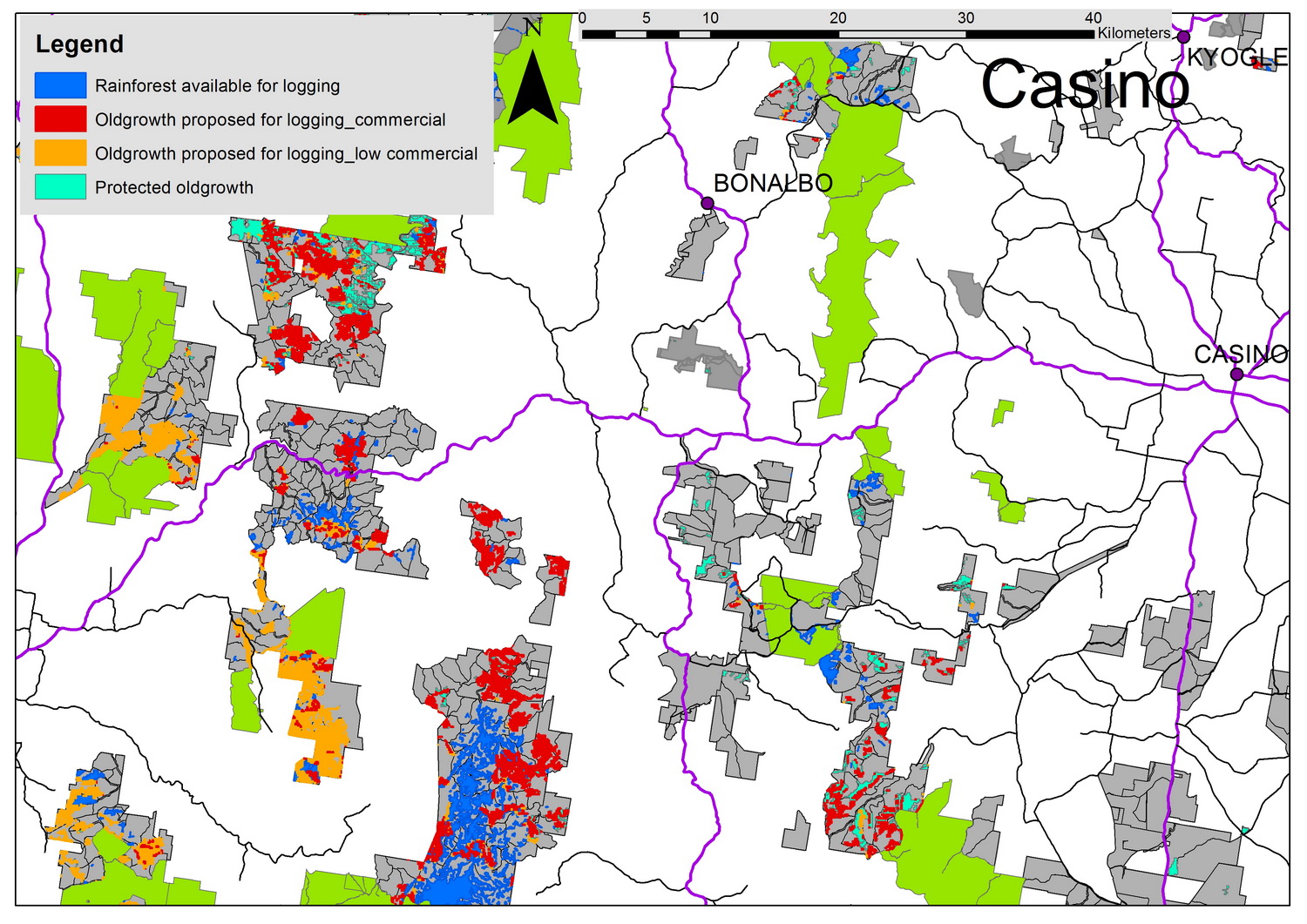 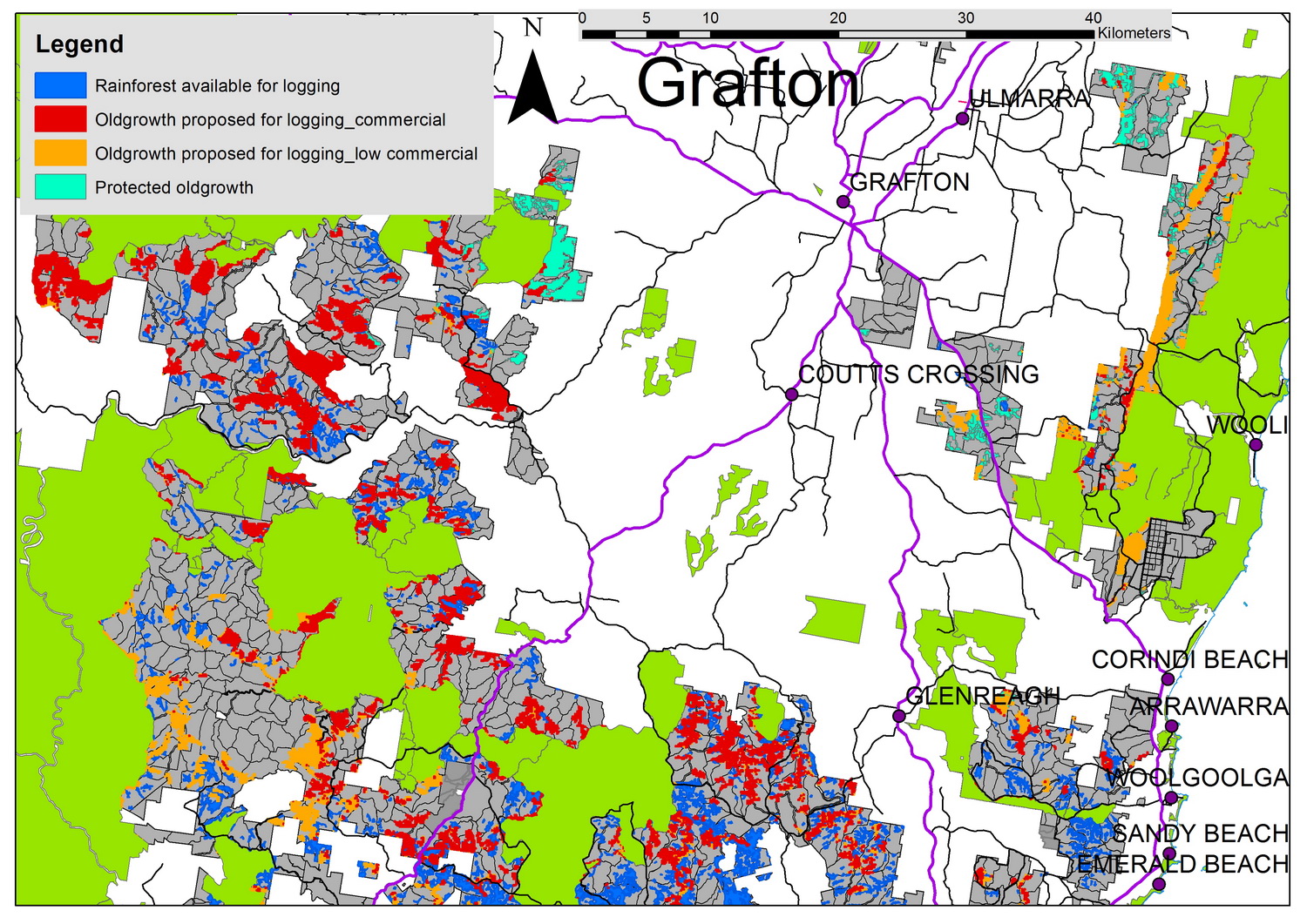 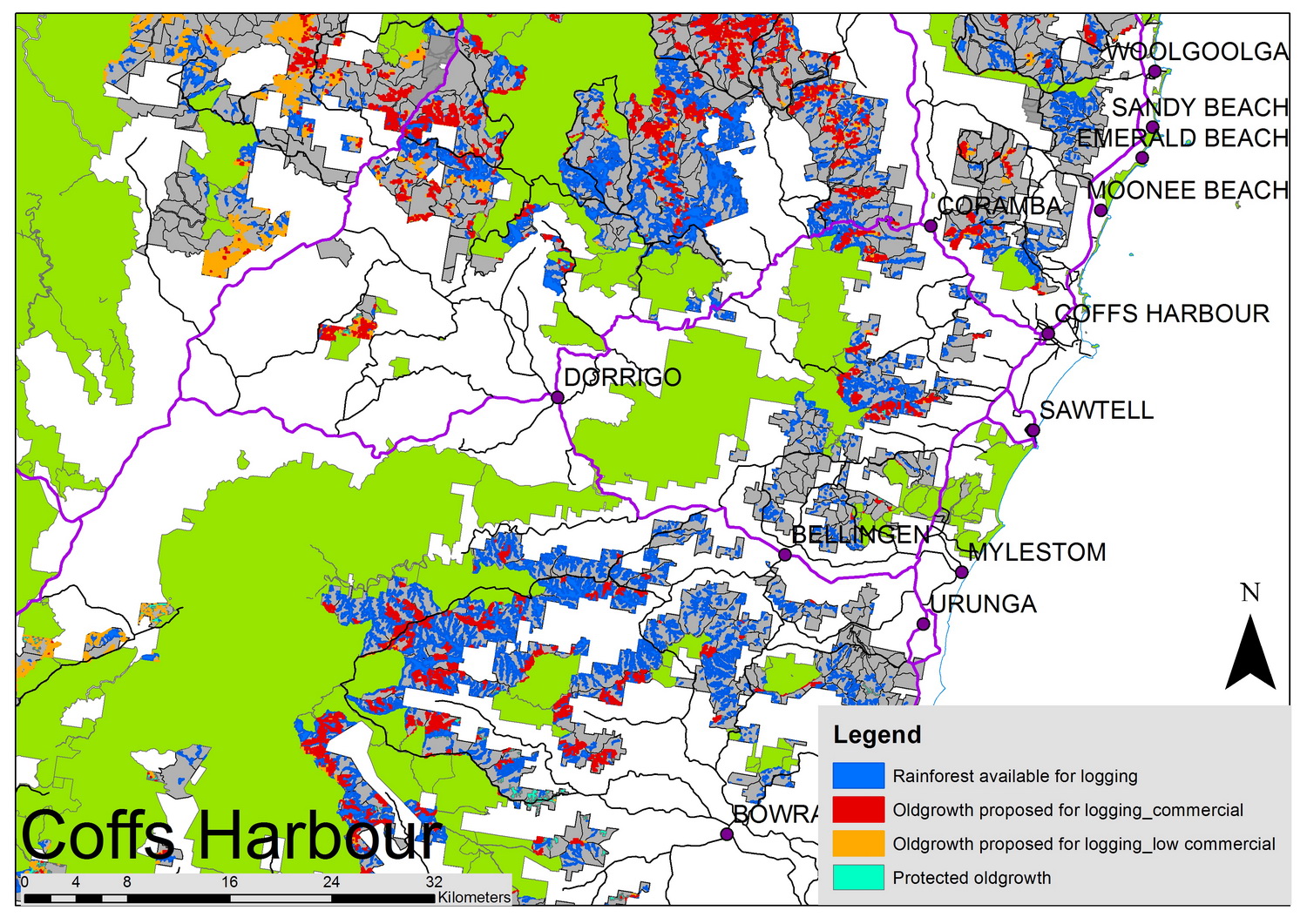 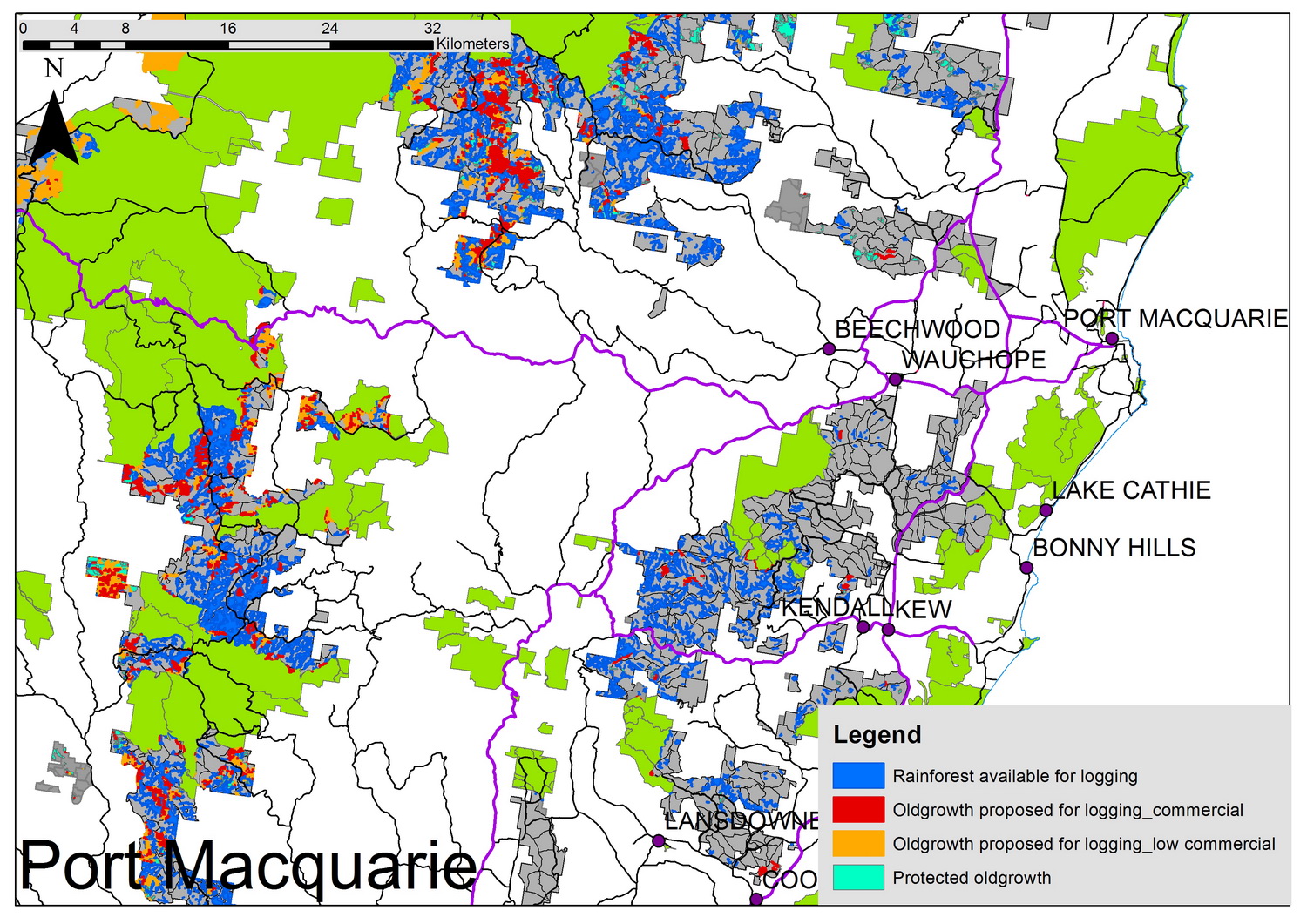