Our chance to knock off a destructive industry before it takes hold!

The Commonwealth Government is consulting about whether to remove native forest wood/biomass as an eligible fuel for burning for renewable energy generation.

Here is our chance to say : Burning Native Forest Wood for Electricity is Not Green, Not Clean and Not Renewable.

Please make a submission in your own words - even a paragraph or two - stating: Electricity generated by burning wood from native forests must be prohibited from being eligible for Large-scale Generation Certificates (LGCs) under the Renewable Energy Target (RET).

This link takes you to the consultation paper, and the online form where you can have your say. https://consult.industry.gov.au/native-forest-biomass-in-the-ret

See the Submission Guide below for some dot points you might want to include.

Submissions Guide Round 2 for the Redbank Power Station

In case you missed the first round, a company called Verdant Earth (?!) Technologies wants to restart a closed coal power station at Redbank (near Singleton) using 850,000 tonnes of dry woodchips per annum (about 1.2 million tonnes of freshly cut wood).

The power station will generate over 2 million tonnes of CO2 (carbon dioxide) every year but they claim it will produce zero CO2 and is thus renewable energy.

Writing On the Wall For Wood-fired Power Stations.

Please send an email to the Minister for Environment and Energy Matt Kean today. Below is a draft which you can copy & paste (or personalise as much as you can) and email to him and his ministerial colleagues listed below. Their parliamentary and electoral office phone numbers are also listed so you can follow up your emails and explain to their staff what you want from them.

Please share a link to this page on your social media and ask your friends to also write and call to save our forests from the furnaces.

I am excited to note the bipartisan support for the recommendation that native forest biomass not be allowed in energy generation facilities in the parliamentary inquiry into “Sustainability of energy supply and resources in NSW” that reported to the NSW Government in August 2021.  I would like to know how will you act to implement the inquiry's recommendations?

These are excellent recommendations and I call on you as minister for Energy and Environment in the NSW Government to accept and implement them expeditiously.

A strong message was also sent to those wanting to profit from burning our forests including the power stations at Condong and Broadwater on the north coast, the proposed Redbank power station in the Hunter Valley and the Vale's Point power station that adds wood to its coal: 'Reconsider and invest instead in genuine renewables!'

You have promised to ensure that there is a doubling of the koala population by 2050. Will the NSW Government now remove the perverse incentive for logging by shutting down the market for native forest biomaterial in power stations that is threatening our forest biodiversity so egregiously?

With a Climate Code Red, our forests are the best technology we have for removing carbon from the atmosphere. We need them to be allowed to get on with the job. What are you going to do to ensure that they can?

Can you do one quick thing to show your opposition to burning trees for electricity?

The last thing the world needs now is to throw a lifeline to the dying woodchipping industry.

Write a short submissions to Singleton Council against the proposal to reopen Redbank Power Station.

POINTS YOU CAN MAKE OPPOSING REDBANK

Hunter Energy intends to burn over 1 million tonnes per annum of biomass, including wood from native forests. It has lodged a Development Application modification with Singleton Council to reopen the 151MW powerplant. This will result in the release of more than 1.5 million tonnes of CO2 into the atmosphere each year.

The company says it plans to source this biomass from an area up to 400 kilometres of Singleton, an area stretching from Moruya in the south, Yamba and Moree in the north, and Dubbo in the west. No specific details as to exactly where the wood is coming from have been provided but our coastal forests are in their sights.

A million tonnes annually is a lot of wood. This proposal ties in with the Forestry Corporation agenda to intensify logging with much of the coastal forests to be be clear-felled apart from the odd tree left for seed. This intensive logging will put additional stress on threatened species populations already facing extinction.

Koalas will be severely affected. Much of their habitat will be cleared as part of the intensive logging program. Coming after the Black Summer fires that wiped out more than half of the north coast population, this proposal could be the final nail in their coffin.

To the logging industry, forest residues or 'waste' are those trees not considered suitable for a sawlog. In Eden more than 90% of trees logged end up as woodchip, and this is called 'residues'.

The proponent claims that biomass it is a renewable energy source which generates net-zero emissions. Wood biomass actually emits up to 50% more carbon dioxide (CO2) than coal when burnt, to generate the equivalent amount of energy. Carbon accounting classes burning wood as zero emissions in the energy sector, as trees are assumed to re-absorb the CO2 when they grow back. What isn't accounted for are the decades it takes for the trees to grow back. Time we don't have. This carbon accounting trick is strongly contested by scientists around the world.

The proponent claims it is “substantially the same project”, as when it burned coal. It is not. It will produce even more emissions and require many more truck movements over a much wider range. It will have a massive impact on forests and woodlands on public and private land, that fall within its wood catchment zone.

To see the documents on public exhibition you can see here.

A Forest is not a furnace!

Please sign on to our campaign to pledge your support and say no to native forests being burnt for dirty power.

Koalas and much of NSW’s wildlife are on death row.

And yet, Hunter Energy has announced a new plan to restart their mothballed Redbank Power Station, fed by native forests to replace coal.

This desperate attempt to prop up a failing sector, will have dire consequences for NSW forests, many of which are only just beginning to recover from the Black Summer bushfires.

If this goes ahead it further locks in industrialised logging of native forest ecosystems and the certain destruction of wildlife already advanced along the horrible path of no return.

If you live within 400km of Singleton your forests are under threat.

Please start to mobilise with your local community groups to say no to this dangerous proposal. 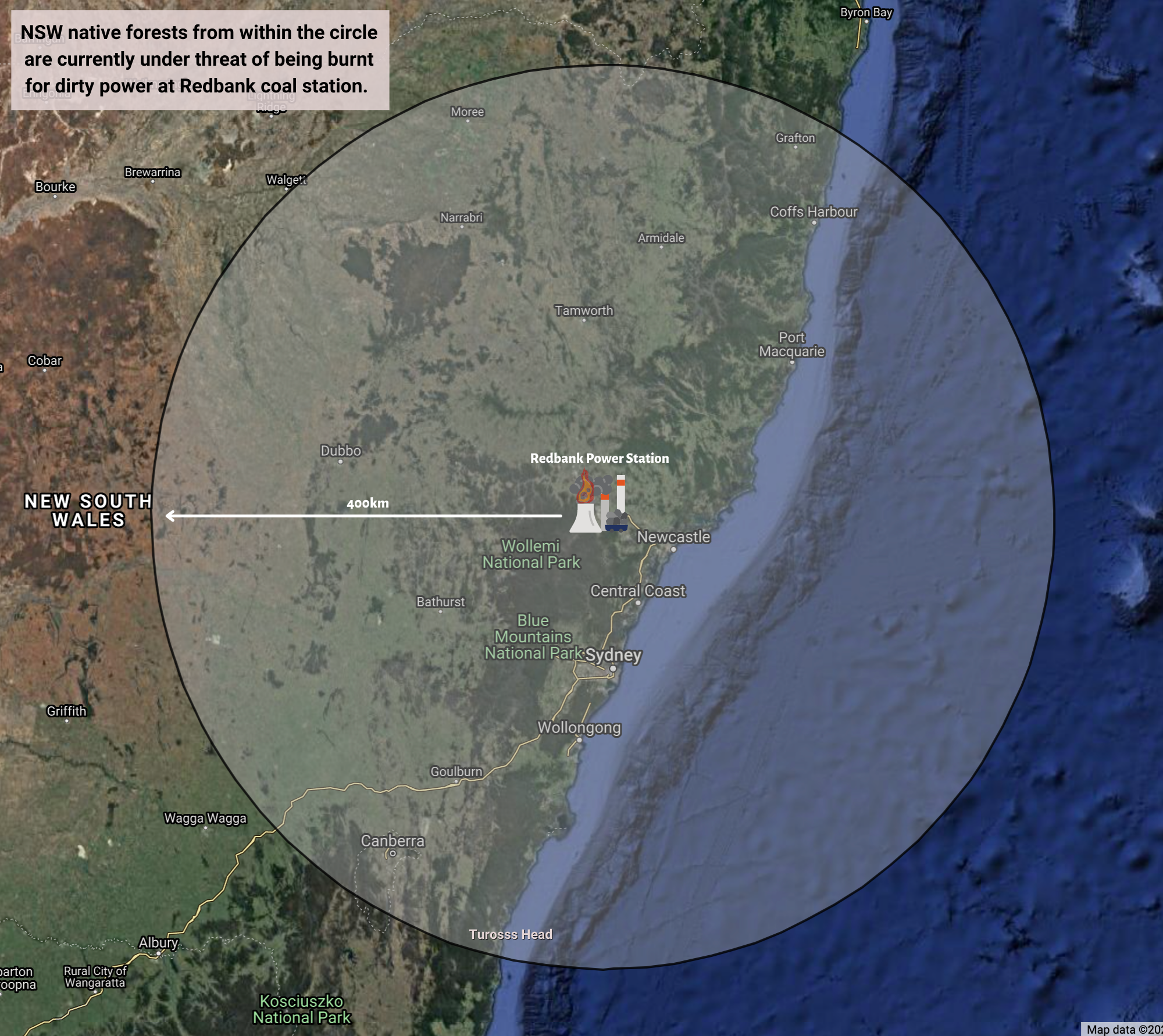 Claims that burning native forests is renewable energy is dangerous and false.  Biomass can emit up to 50% more CO2 than coal to generate equivalent amounts of energy, setting up Redbank to be one of the most polluting power stations in Australia.

We are in a climate and extinction emergency that requires us to reduce atmospheric carbon as soon as possible. This requires retaining every tree we can to take up and store carbon, not increasing logging and clearing to pump more into the atmosphere. 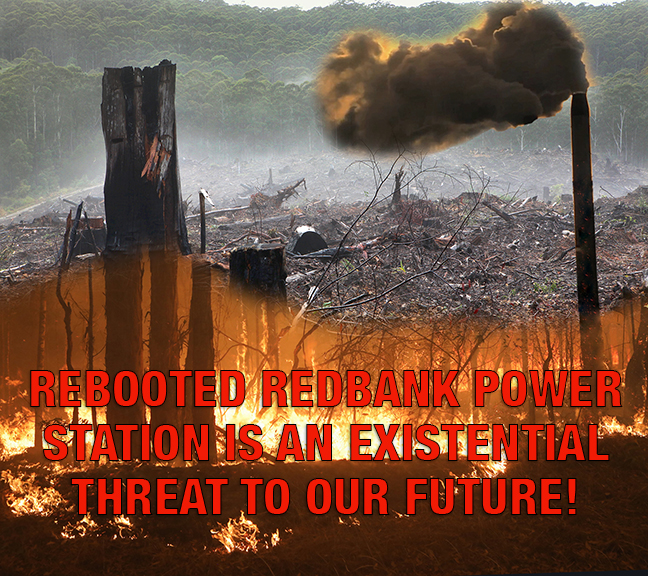 Burning native forest wood- sometimes referred to as biomass or bioenergy- is a big problem for our forests, catchments and the climate.

Unfortunately it's being heavily promoted, particularly in Asia, where both Japan and South Korea have huge wood-fired power stations. Australian forest companies recently sent a delegation to Japan, offering wood from our forests. It is this market that is driving serious intensification of logging in the forests of northern NSW. 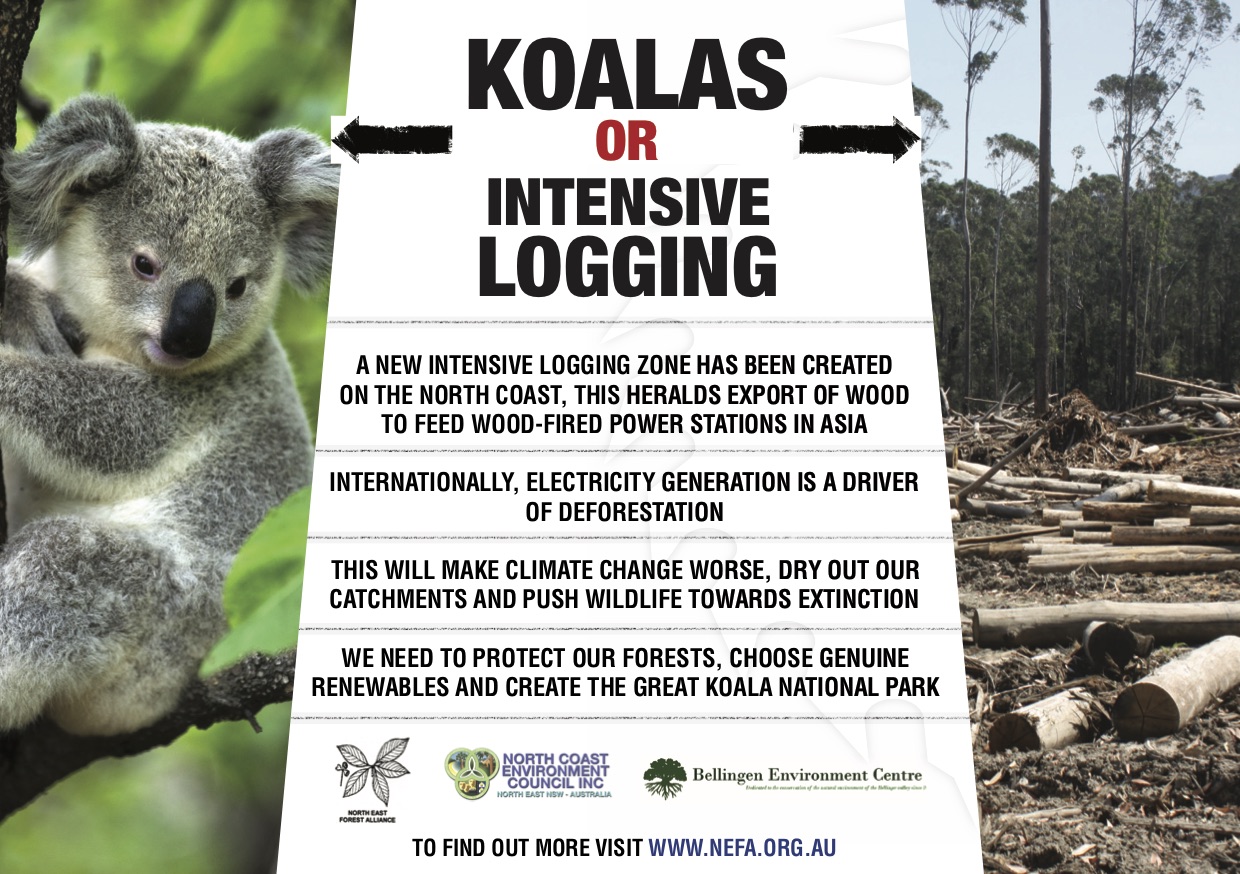