Following formation of the North East Forest Alliance in 1989 its first direct action was to blockade a new logging road being constructed into the Desert Creek valley of North Washpool.  The primary target for logging was rainforest, though the intent was also to open up a large area of oldgrowth/wilderness for logging. The Armidale branch of the Wilderness Society had nominated it under the Wilderness Act in 1988.

A blockade was established in mid-August 1989.  It lasted for 2 weeks and 14 people were arrested before the Forestry Commission was forced to stop. It transpired that the Forestry Commission had failed to undertake the archaeological investigations required by the 1980 Environment Impact Statement (EIS) and the road was being pushed through significant Aboriginal sites The roading was thus illegal. Logging and roading activities were suspended in North Washpool to enable assessment of areas of Aboriginal significance and consideration of the Wilderness nomination that had been made. The assessment showed that there were many significant Aboriginal sites in the Desert Creek valley, with some having been severely damaged.

A 1,000 hectare Aboriginal Place was eventually identified for protection. Having rejected the wilderness nomination, the Government announcement in September 1990 that roading and logging would resume.  NEFA immediately established another blockade to buy us time to seek an injunction in the Land and Environment Court. This was the first time NEFA constructed a tripod from bush poles and established a CB radio system to allow direct contact with the outside world.  This time we managed to commence legal proceedings before the blockade was tested. An EIS had already been prepared, so we had to challenge its adequacy and implementation.

In October 1990 our case was heard in the Land& Environment Court (Corkill vs Forestry Commission of NSW, 1990). We presented evidence that they were logging stands that had been expressly protected in the EIS, logging compartments they had not prepared the required harvesting plans for, logging well in excess of the 50% canopy retention required by the EIS, not retaining 100m buffers free from logging along roads as required by the EIS, and not implementing the required erosion mitigation conditions.

The Forestry Corporation sought to avoid their rainforest problems by seeking approval from the court to log eucalypt forest in one compartment as an interim measure.

However, it is obvious that since 1982 the Commission has approved logging of rainforest areas in North Washpool in breach of the provisions of the E.P.&A.Act. . It was ultimately conceded by Counsel for the Commission that all rainforest areas of North Washpool were expressly excluded from areas to be logged in the 1980 environmental impact statement.

... In my opinion, the lawfulness of approvals to log rainforest areas which were expressly excluded from the only environmental impact statement prepared for the North Washpool area is a most serious matter for determination at the final hearing.  I have no hesitation in determining that there are a number of serious issues raised in these proceedings as to the lawfulness not only of the 1990 approval to resume and subsequent harvesting plan, but also of the previous decisions upon which they were based.  I am of the opinion that, subject to the exercise of the Court's discretion, such activities should be restrained pending further orders.

... Regrettably, there is conceded to be a history of departure by the Commission from not only its own approvals in the logging of this area, but apparently a continuous avoidance of the obligations imposed by the E.P.&A.Act.  In such circumstances, it is difficult to have confidence that, unless restrained, the Commission will observe its statutory duties. 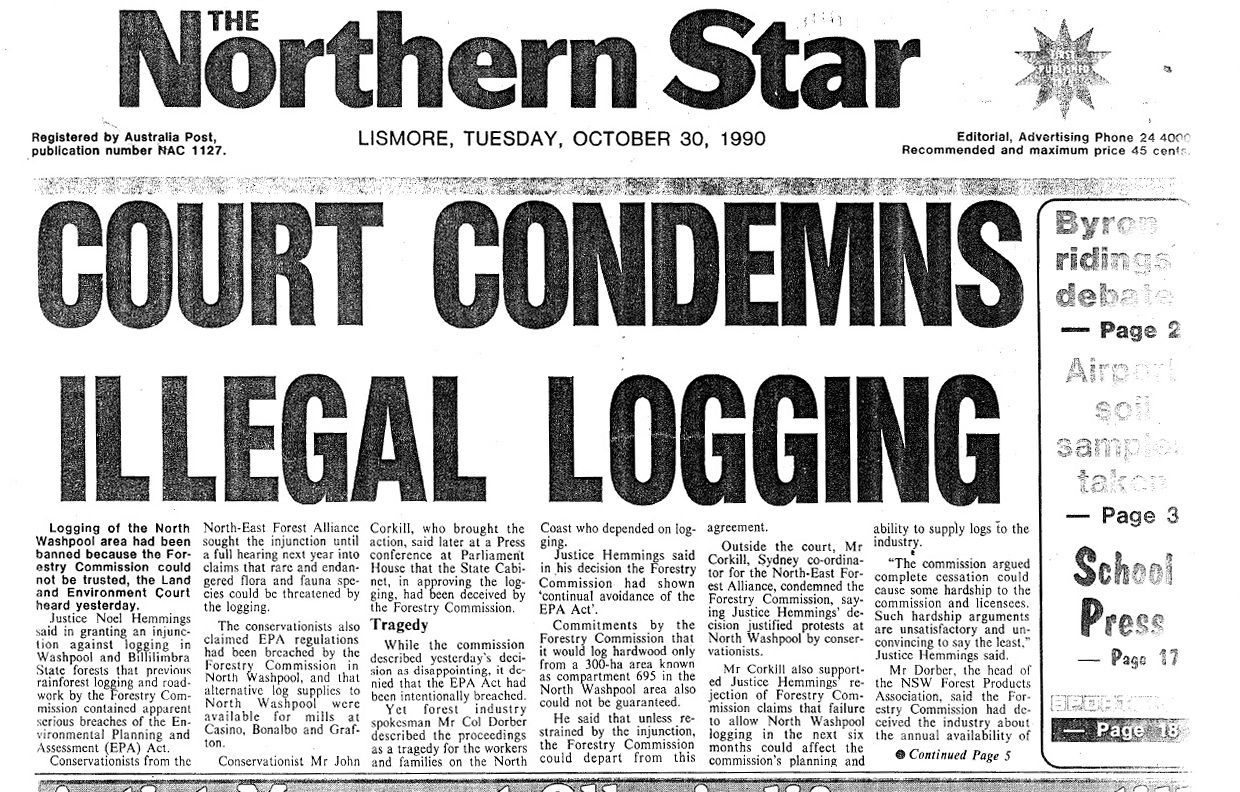 This precluded our ability to bring the wrongdoers to justice, so NEFA asked the new Forestry Minister, Gary West, to ensure they were disciplined, though he refused to take any action against those responsible for the illegal logging. He thus fostered the Forestry Commission’s culture of non-compliance.

This was the case that finally brought logging of rainforest, as mapped by State Forests, to an end in NSW, 8 years after the rainforest decision.  Though there was still the issue of how well rainforest was mapped.

North Washpool was never logged again, and was protected as part of the Washpool National Park in 1997.