Welcome to the NEFA Leaf June Edition - your monthly fix of forest news, politics, community campaigns and ways to take action for forests across the North East Coast of Australia.

You can check out other forests news between editions on our website.

A fortnight ago, local forest defenders in Coffs Harbour climbed onto the Forestry Corporation awning dressed at koalas where they stayed for hours to have their voices heard. They were joined by a koala playing bongos on the roundabout which captured the attention of the local NBN news.

Bec Oliver-King, who was up on the awning shares, “Every day a small group of men with huge machines turn vibrant, diverse and precious native forests into a mangled mess – ready for weeds, drying out ready for fires, destroying natural carbon sinks and the homes of our unique and special wildlife.... Could you tell your grandkids that you stood by and let them have it? Well I can’t. I’ll do whatever it takes to protect our public forests, waterways and wildlife from native forest logging."

The four were joined by a crowd of 80 people who rallied outside the doors, with speeches, music and chants. The four koalas came down on their own accord after 5 hours, helped by a ladder and a crowd of people protecting them from police. There has been no arrests of yet.

Watch the Live Feed of the koalas on the roof here or the local news NBN story here. 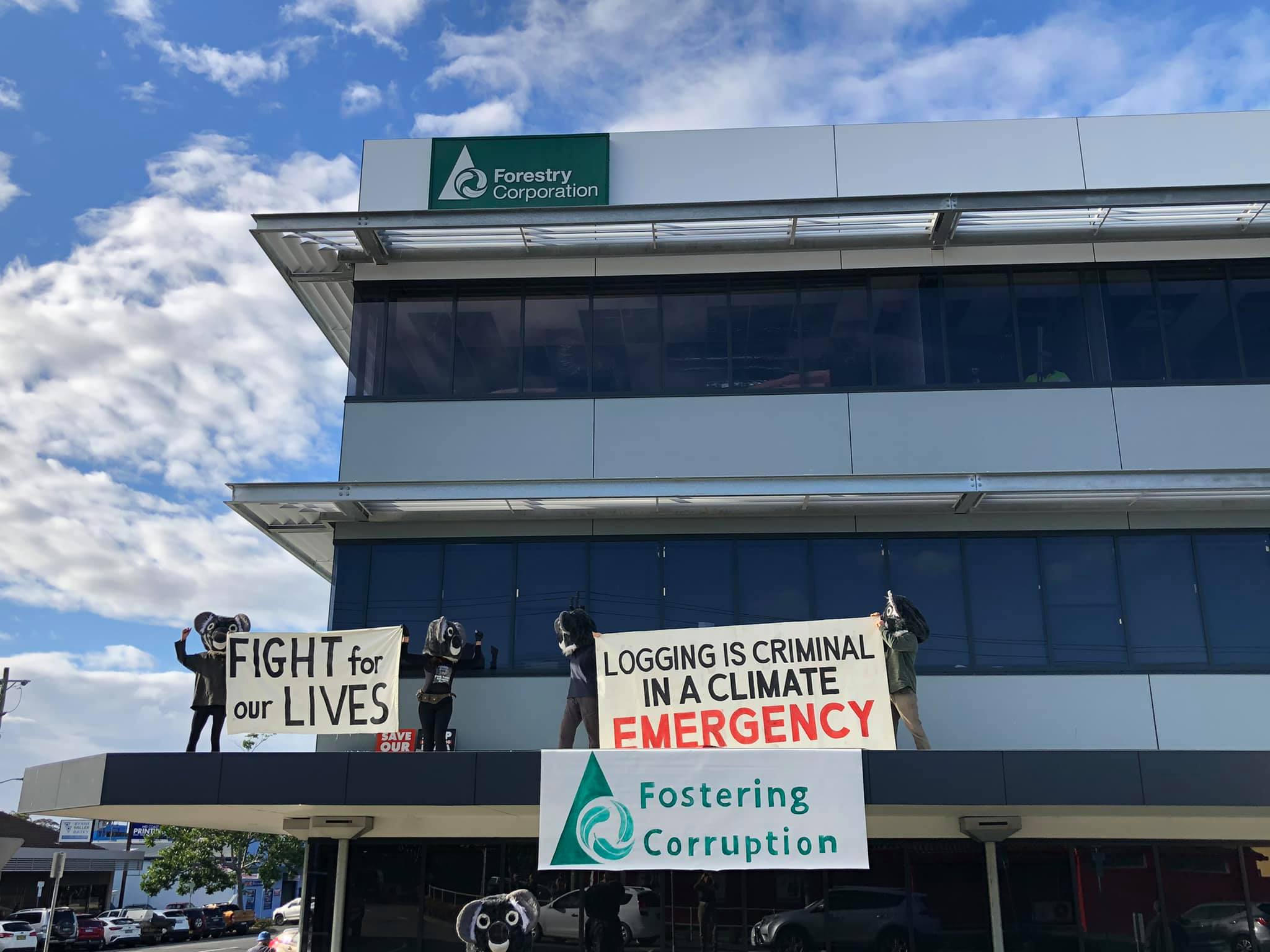 “People are shocked and outraged when they learn that our public native forests are still not safe from the destructive impacts of industrial logging. NSW citizens are demanding an end to this government’s ideologically driven agenda of forest carnage.”

Logging at Cherry Tree State Forest is imminent so we encourage anyone to join us as we #StandUp4Forests every Friday either in a forest or in town around Lismore and Casino area. 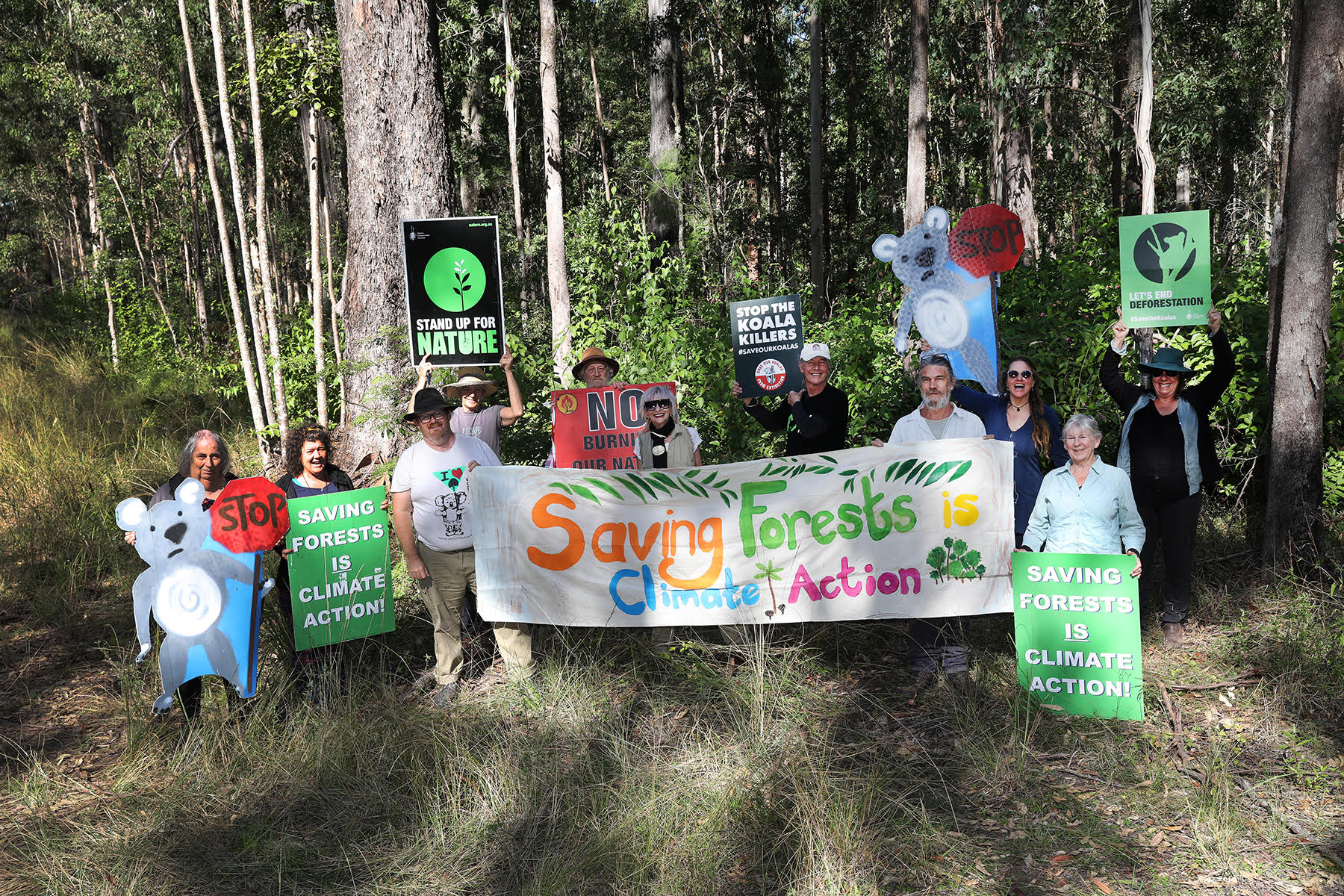 The Fridays4Forests campaign continues to grow as people become aware of the widespread threat of logging to our public native forests in NSW.

Last Friday a happy band of forest protectors gathered at Cherry Tree State Forest to voice their commitment to defending this extraordinarily beautiful and important forest remnant from destruction by the corporate timber industry.

Join the swelling chorus of voices in our forests calling for a healthy future for our forests by holding a pop up action wherever you are. If you are on Facebook you can join this group and or invite your friends to this event.

If you go down to the woods today, to Conglomerate State Forest, this is what you'll find. 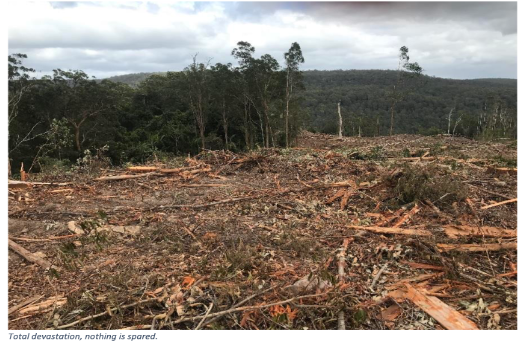 A small crew went out to inspect clearfell logging operations in Conglomerate state forest, west of Woolgoolga. What they found may explain why the water in the Orara and Clarence Rivers has resembled cream of chicken soup ever since the rains began at the end of last year.

The logging has been extensive across steep slopes and post-logging erosion is obvious. The resulting regrowth is weed infested.

Logging has occurred in forest known to support a number of threatened species, including the critically endangered Scrub Turpentine, Rhodamnia rubescens  and the Glenreagh Boronia, Boronia umbellata.

This kind of logging is happening right across the region and the resulting turbidity is certainly one of the reasons that some local Councils are unable to transfer water from the rivers to their reservoirs.

Things have been buzzing at Camp Nunguu with the camp hosting regular events and many people dropping in. The Blockade camp is in a beautiful part of Newry State Forest, with secluded camp spots and epic sunrises. It is on the edge of the compartment boundary where over 1000 hectares are due to be logged by NSW Forestry Corporation (FCNSW) any day.

There's been film screenings, music and poetry evenings. In the days we have hosted NVDA Trainings, Koala surveys, Climbing and Bamboo workshops. There's something for everyone - even a camp office space with solar charging and good reception!

We are still needing more numbers to keep camp strong, if you have Facebook and you'd like to know more about camp there's the low down here. Otherwise email [email protected]. 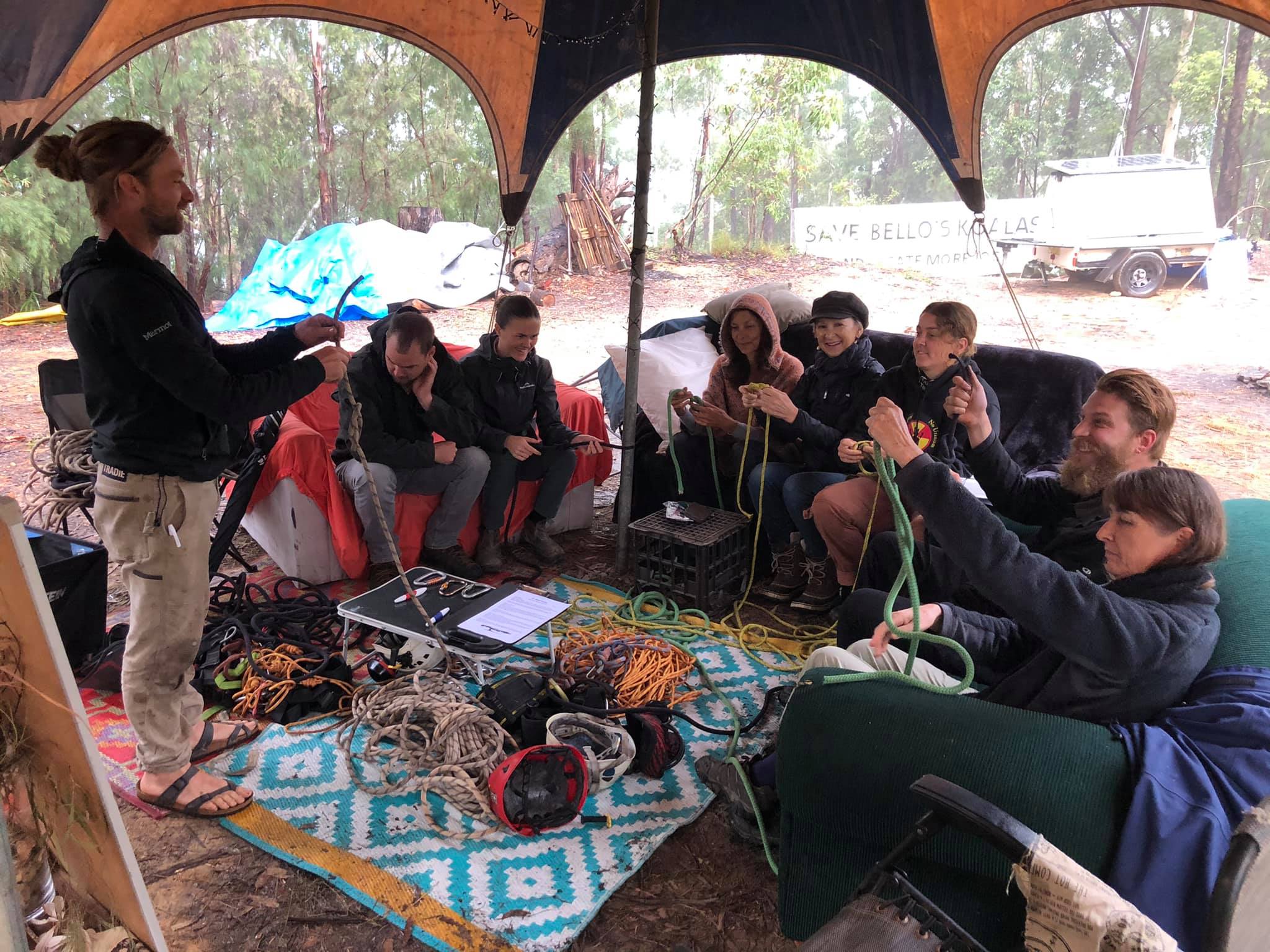 Our big camp fundraiser is coming up July 9. We are hosting an Art Auction and are lucky enough to have some very exciting announcements to be shared soon!

There will be art for all - the rich and the poor - so please invite everyone you know! 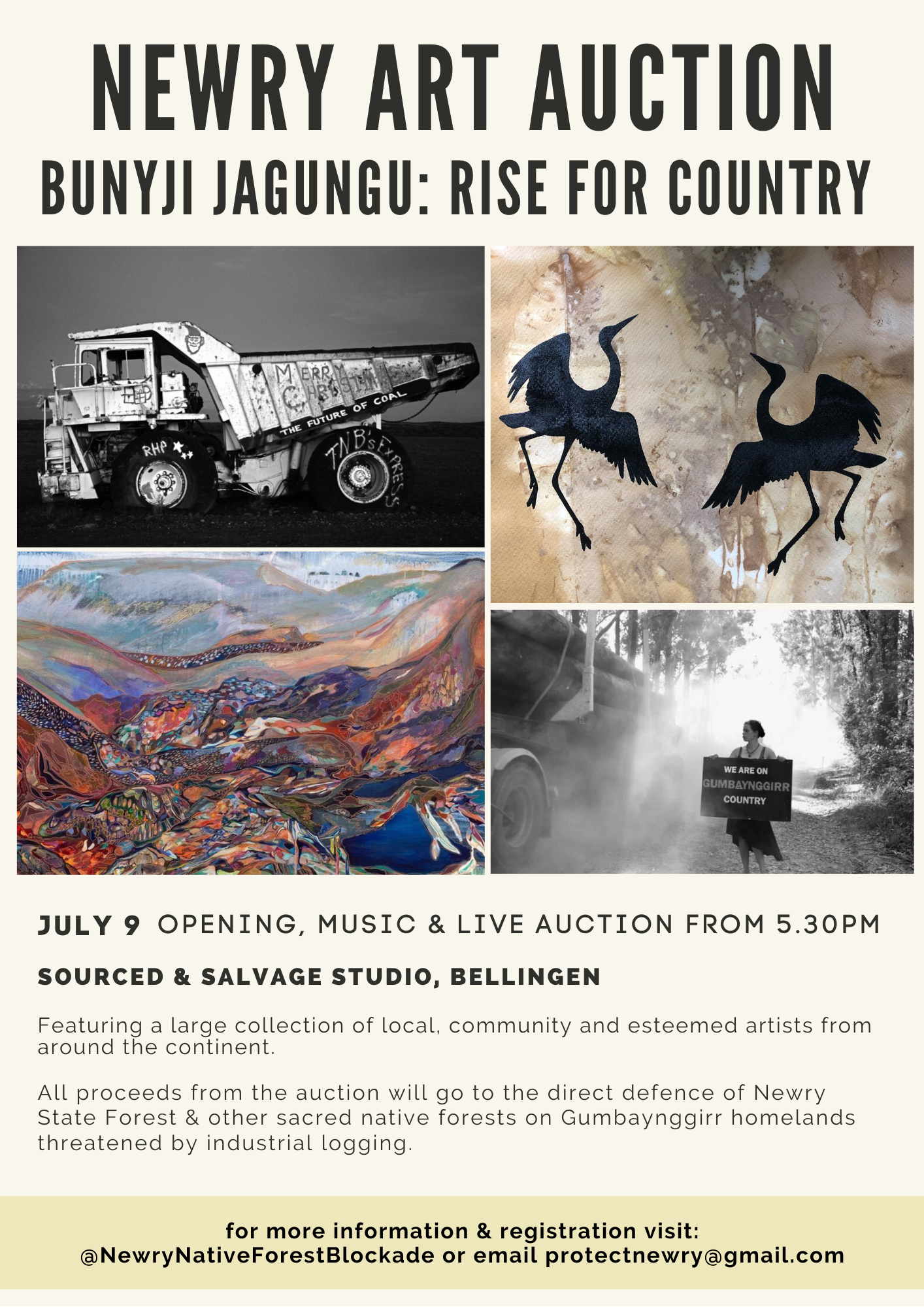 Last week (29th May 21) a group of locals participated in another koala survey. Both surveys have found koala scats in Compartment 27 and 23.

Forestry has been down this ridge recently and were doing some drainage marking, about 800m down on the old snig track is a grey gum with a horizontal bar in fresh pink paint the tree had old a fresh scratches. Under this tree we found 7 scats, under the tree next to it we found a further 27 scats.

This scat collection seemed to indicate that two animals were involved as some scats was smaller. Possibly a mother with a large joey. 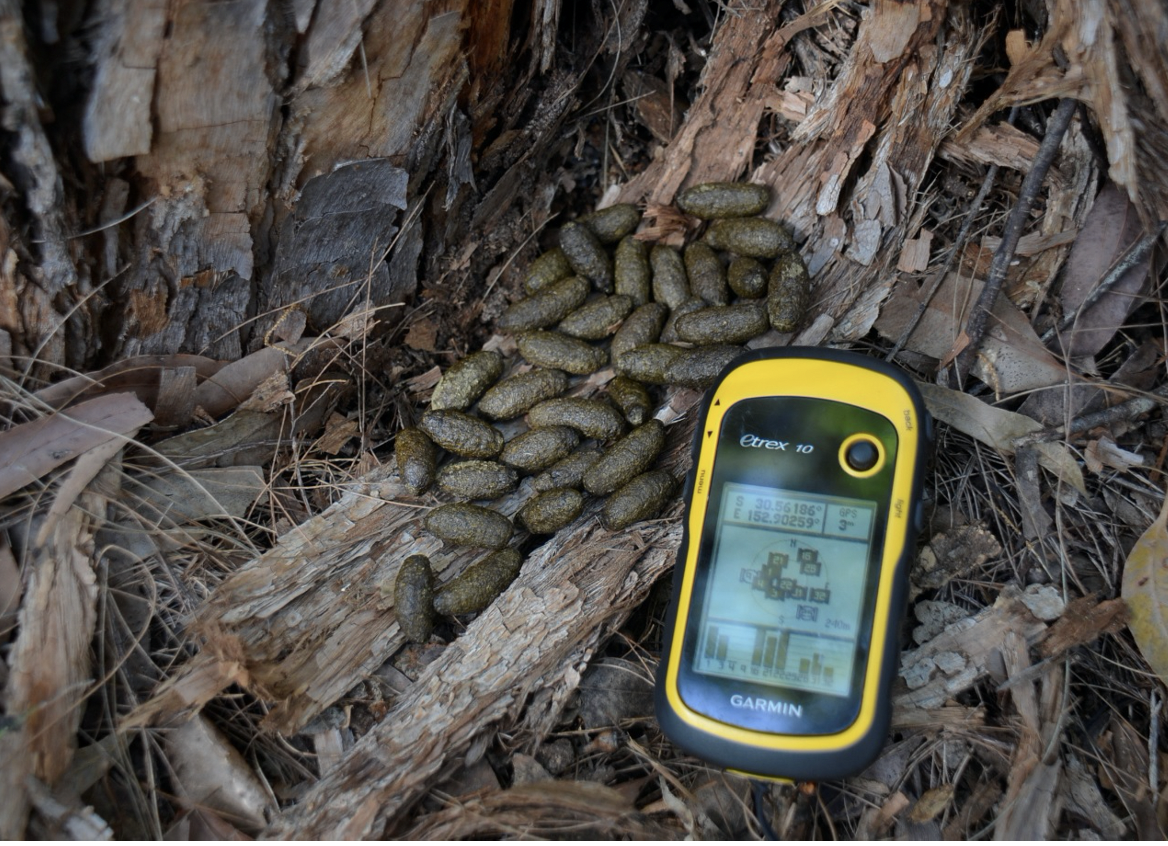 Below this location and to the north we found two more koala records. One quite small Tallowood had 34 scats. 6 more scat were found in the vicinity of a medium sized iron bark.

We believe this area would turn out more records with another search as the koala habitat continued to be good further down the ridge line.

The second survey was done on western boundary trail, where there's plenty of grey gums with fresh scratches. We found 1 scat under a grey gum then a further 19 scat under a second grey gum. From here we searched in all directions and were unable to find any more.

We also found a huge Blackbutt measuring a circumference of 8.8 metres! There's plenty more like this across the forest.

Overall it's a spectacular patch of forest being actively inhabited by koalas, sugar gliders, lyrebirds and lots more. Just more evidence to prove why this forest must stay intact! 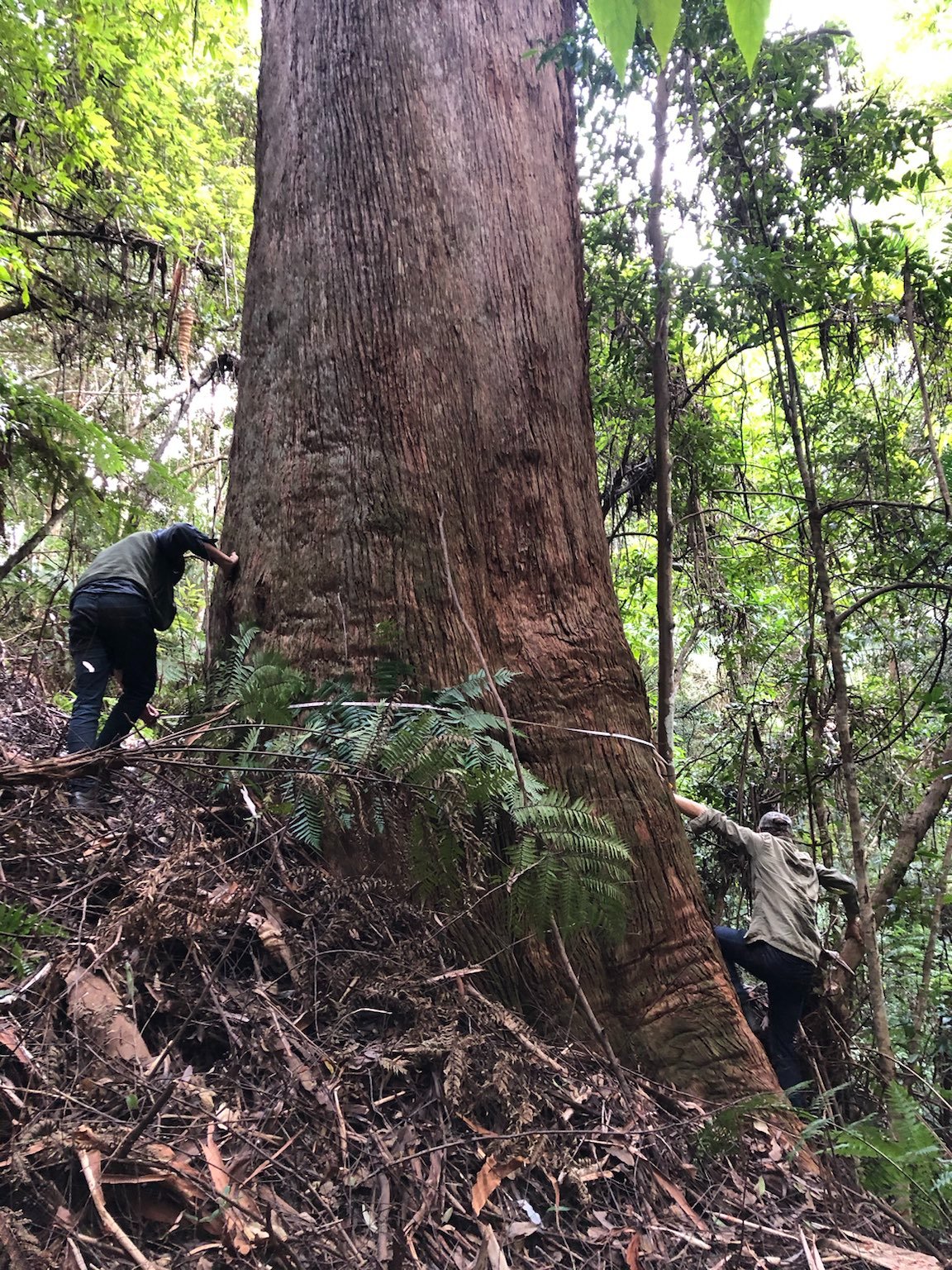 No Electricity from Forests

The No Electricity from Forests group have printed a new poster, see a copy of it below. It doesn't really matter where the trees come from that go up in smoke... burning trees means emitting lots of carbon dioxide. More in fact than burning coal to get the same amount of electricity.

Trees are being cleared all across the north coast under a variety of scenarios. From the Kalang River to the Queensland border, trees are being taken to the Broadwater and Condong power stations to be burnt. Plans are underfoot to take from hundreds of kilometers around Singleton in the Hunter Valley, to burn in the Redbank coal power station.

To buy one or several A2 Corflute poster ($5 each) write to Les Mitchell and he'll let you know bank account and postage cost details.

We need to get the message out there that this is not some wacky idea that's never going to happen. It is happening and it's taking away opportunities for genuine renewable energy. 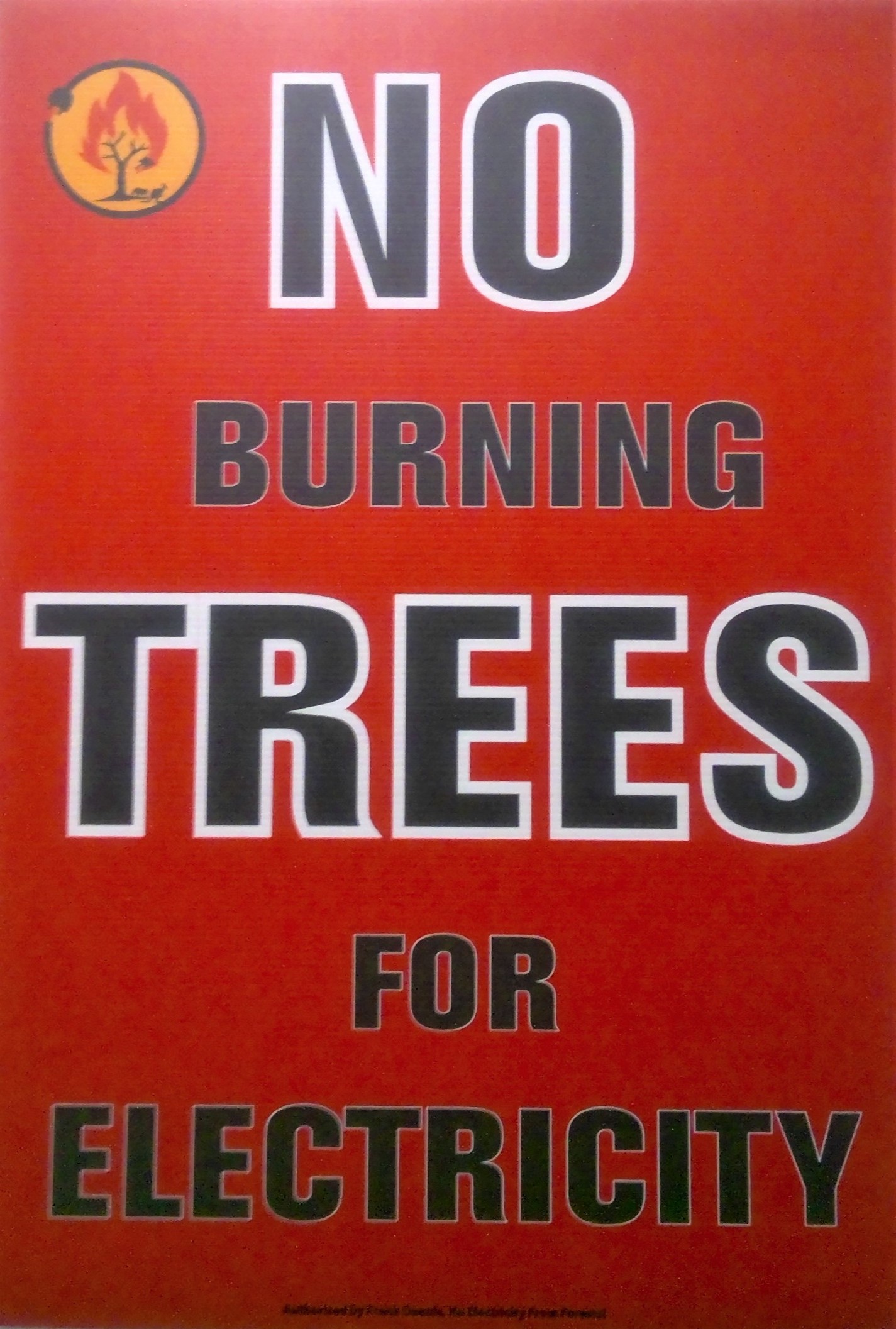 In May (7/05/21), The Bellingen Shire Council Councillors and senior staff had the opportunity to meet with NSW Forest Corp (NSWFC) to discuss the continuation and increase of the industrial logging of some of the most biodiverse, intact, and unburnt Forests on the East Coast. There was some hope (at least from the three Greens Councillors and the community) that we would be able to get some up to date, accurate and easily accessible information on what is the degree of, past, current and future logging plans for the Bellingen Shire (the so-called wood bowl). We were also hoping for an improvement in the communication and engagement from FC to the Council, the community and other stakeholders that are impacted by their disruptive and destructive operations. Finally, that we would see some acknowledgement that things had to change in the management of public forests considering the increasing on-ground evidence that climate change is upon us and is a major threat to our way of life.

However, what we received was the same old spin via a self-congratulatory PowerPoint presentation that cherry picked the science and produced inaccurate facts about the impacts of industrial logging. They stated that Koalas and other endangered species were doing well in logged forests and kept referring to one scientific paper that has been regularly challenged as being too simplistic and far from inclusive. This paper went against all the independent science and the findings of the NSW Parliamentary enquiry that stated, we are seeing massive reductions in Koala numbers, with a 71% decline in Koala numbers in this state since the Black Summer Bushfires. The sad reality is koalas in NSW are in serious risk of going extinct by 2050.

On Saturday 5th of June, Kyogle Environment Group will host a stall from 7.30 to 12 noon at the Farmers Market in Stratheden Street, Kyogle (next to the library). The stall will feature free tree giveaways and the announcement of prizes for a school art competition.

Also on Saturday 5th of June, the Lismore Environment Centre will be hosting in Pride Plaza from 12 noon to 5pm its inaugural World Environment Day event with a Bundjalung smoking ceremony, speakers, live music from Chris Fisher, Luke Vasella and Myki Jay, all live broadcast on River FM radio from 12 noon to 5pm.

Pride Plaza is located next to the Lismore Transit Centre at the corner of Molesworth and Magellan Streets.

Caldera Environment Centre will follow on the next day (Sunday 6th June) in hosting their annual event held in conjunction with the Nimbin Environment Centre and the Northern Rivers Guardians. There’ll be a workshop by the Hoopla Kids Circus, stalls and speakers amongst many other attractions. It's in Knox Park, Murwillumbah from 10am to 3pm.