The Forestry and Wood Products report "Community perceptions of Australia’s forest, wood and paper industries: implications for social license to operate" surveyed  over 12,000 people from throughout Australia and found 70% of urban, and 65% of rural Australians find logging of native forests unacceptable, compared to just 10% of urban, and 17% of rural Australians finding it acceptable.

This reaffirms polling by Reachtel in northern NSW (Ballina and Lismore) late last year that showed that over 48% of people believe the most important value of State forests are the protection of wildlife, nature and trees, with another 23% considering it is the protection of water supplies, 10% carbon storage and 9% recreation. Only around 10% considered the best use was for logging, woodchiping or burning for electricity.

Continued logging of public native forests clearly does not have a social license and must be phased out as soon as possible, said NEFA spokesperson Dailan Pugh.

"Logging of native forests is a dinosaur industry, and with 87% of our sawn timber now coming from plantations there is no excuse to go on logging public native forests,

"The NSW and Commonwealth Governments need to start listening to the community rather than the National Party, and refrain from the imminent intent to entrench logging of public native forests for a further 20 years in new Regional Forest Agreements while further increasing logging intensity and slashing environmental protections.

"Instead of increasing logging the Governments need to implement a strategy to rapidly phase it out, and begin repairing the damage they have inflicted on our irreplaceable public forests", Mr. Pugh said.

There are therefore much lower levels of social license for native forest logging than for producing timber using plantations. Additionally, views were very strong about unacceptability of native forest harvesting, with most of those who indicated it was unacceptable choosing the response of ‘very unacceptable’ rather than moderately or slightly unacceptable.

Overall, the findings suggest that native forest logging is equated by many Australians with depletion or ‘mining’ of resources, as it is clustered with coal-seam gas extraction and open-cut mining in terms of acceptability. The findings also suggest that it is not associated with ideas of renewability, with solar farms and wind farms – producing renewable energy – having much higher acceptability than native forest harvesting, as do other practices often associated with sustainability and environmental protection. 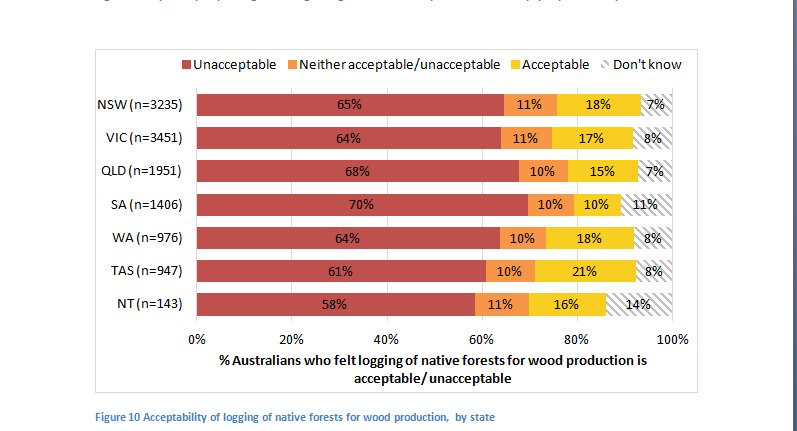