The Governments' decision remains as it was always intended, they have increased logging intensity throughout State Forests, established a 140,000ha clearfelling zone from Taree to Grafton, reduce stream buffers, removed most wildlife protections, and intend to open up oldgrowth forests and rainforests for logging, said NEFA spokesperson Dailan Pugh.

"The removal of the need to look for and protect Koala High Use Areas ahead of logging, and to increase logging intensity in their habitat will likely lead to the extinction of this Australian icon, along with many of its compatriots. 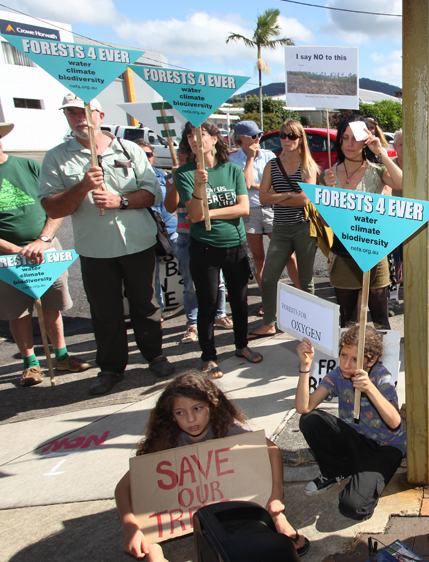 "Once again the submissions to the new laws showed the lack of community support for the industry, with just 13% of the 3,148 submissions supporting the industry. It clearly has no social license.

"As we expected the Government never had any intention to listen to our concerns. In a token effort to be more compliant with Commonwealth recovery plans they have increased retention for hollow bearing trees, though still refuse to protect the recruitment trees essential to maintain these vital resources for so many of our threatened species into the future.

"They also claim to have listened to the beekeepers and reinstated the current requirement to retain 5 mature nectar feed trees per hectare, though this only applies within 2 km of the limited records of Regent Honeyeaters and Swift Parrots".

"Lastly they claim to have reinstated some stream buffers, though this is a smoke and mirrors trick, restoring some while taking away others.

"The outcome is still the same that most of our vital headwater streams will have their current measly 10m buffers reduced to 5m.

"Our forests are in decline as logging spreads lantana and dieback through them. This is worsening as logging intensity increases and global warming gathers momentum, though the Government remains in denial.

"The National Party has just added another notch to their belt by achieving this major reduction in the logging rules and protections that have applied to public forestry for the past 20 years. It is a disgrace that they can get away with their environmental vandalism" Mr. Pugh said.