I’m woken in the dark, just before dawn, by torchlight flashing across the camp, and look over to see the long black shape of heavy machinery parked on the forest road. With my heart in my mouth I get up and approach as quietly as I can, ready to take a photo to send out with an action alert to our crew asleep here at camp, and in towns from Orara down to Grassy Head. But what comes into focus as I get closer is a Land Rover with twelve-metre long bamboo poles tied to its roof racks (that’s almost as long as a semi!) which Old Mate has driven through the winding backroads over the top of the mountain. 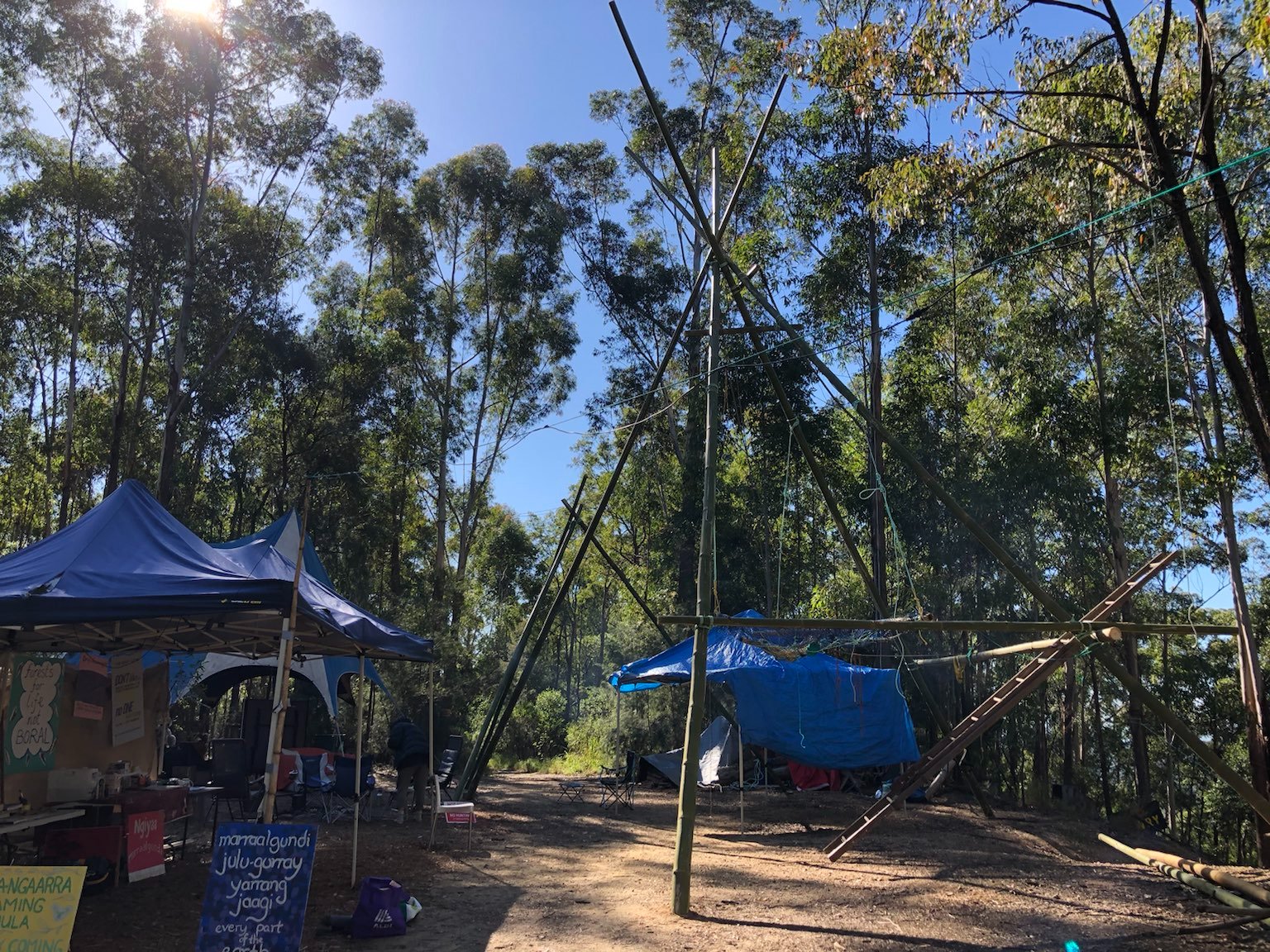 We spend the day building the two tripods that now give Camp Nunguu an impressive sense of permanence on behalf of the Gumbaynggirr Nation; that say we’re here, and we’re staying put.

I’ve been living at Nunguu for nearly six weeks. It’s well set up, with a kitchen and a big marquee covering tattered but comfy lounges - just like a Brunswick bar. And Muzz’s solar trailer lights it all up, and allows us to charge our phones and computers so we can keep working while we’re keeping watch. As well as the residents, there’s been a daily procession of visitors and supporters, bringing food and firewood, conversation and encouragement, including a Sunday with the Knitting Nanas when we got to eat cake all day – or I did anyway - and last week, for a gee-up, we had a screening of some classic forest campaign docos in the outdoor cinema we’ve set up with some kit from the Bellingen Environment Centre.

We’ve also been hugely energized by the unexpected arrival of lots of young people who’ve come to stay in the past few weeks.

They say that courage begets courage. It definitely begets a buzz being around the frontliners who lace up their boots to go out and tread on the toes of the giant that’s devouring big plates of country every day. They give a sense of hope, and the possibility of becoming bolder, as they share their practical and tactical skills in workshops on everything from climbing to Non-Violent Direct Action.

I wrote a bit last year about Nifty, the Wangan Jagalingou activist who’d just returned from a lock-on at Wild Cattle Creek and had been banned from entering the blockade in the Baga Baga (Nambucca) forest. He had to sit alone on the edge of camp or face re-arrest (which he obediently complied with - until nightfall). Someone told me that night that this was an often-used tactic that attempts to keep inspirational leaders like Nifty from ‘infecting’ the rest of us with ideas of civil disobedience.

We had to build a small tripod first to lift the big one up, and at the end of our day’s work, looking at the two of them side-by-side, I said to Old Mate that they looked a bit like the Great Pyramids - but with one missing, and suggested that maybe we could build another smaller one.

‘Or a bigger one,’ he replied.