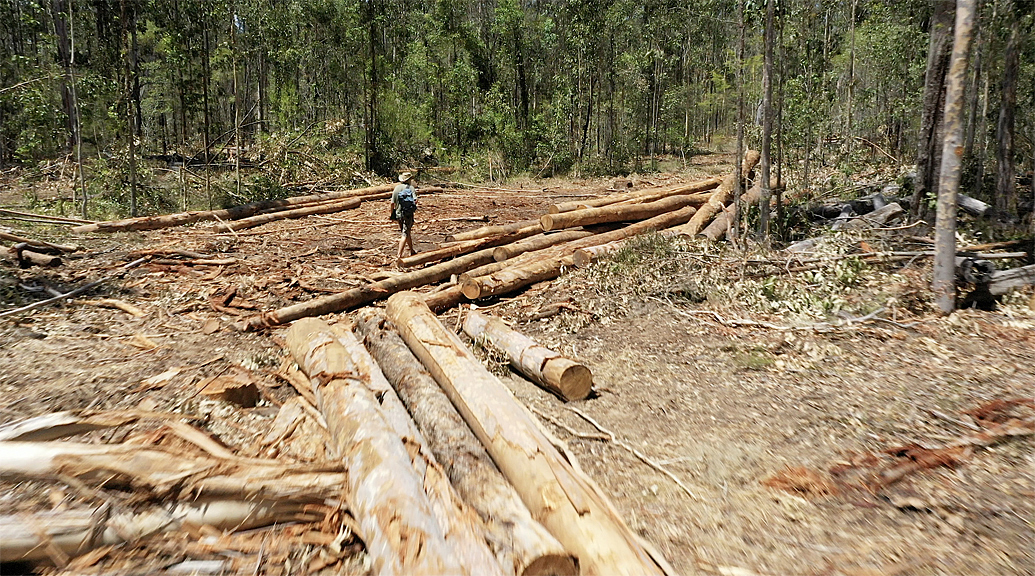 The North East Forest Alliance (NEFA) have been undertaking systematic audits of Forestry Corporation logging operations over the past decade. Over that time we have identified hundreds of breaches of the Forestry Corporation's Threatened Species Licence, Environment Protection Licence and Fisheries Licence, with most of those investigated confirmed by the Environment Protection Authority (EPA) or Fisheries NSW.

You can read the full audit report here: Preliminary Audit of Gibberagee SF Compartments 104, 105, and 106

Until the EPA made the political decision in 2016 to stop issuing Penalty Notices, NEFA's systematic audits of 10 logging operations had resulted in 12 Penalty Notices being issued, with paltry fines of $300-500 each. There were 2 botched attempts at prosecutions by the EPA. For the hundreds of other offences the only consequences were meaningless cautions and warning letters,

We undertook two audits of logging operations in compartments 117 and 118 of Gibberagee State Forest in 2017.

The first audit in March found that the Forestry Corporation were not applying and protecting the 10m buffers on unmapped drainage lines required for the endangered Purple Spotted Gudgeon, had failed to appropriately mark the required 50m exclusion zones for the nationally endangered Narrow-leaved Melichrus and were roading and logging within them, and were recklessly damaging retained hollow-bearing and recruitment trees while refusing to select suitable recruitment trees. Koala scratches on Grey Gums were identified, though time constraints precluded us undertaking Koala scat searches.

When attending Gibberagee State Forest on 10th of March, at the invitation of the Environment Protection Authority to show them breaches we had reported, NEFA was ordered to leave by the Forestry Corporation without being allowed to show the EPA the breaches we had identified up until then. The Forestry Corporation subsequently sent me a letter, postmarked 13 March but backdated to 6 March, threatening me with a $2,200 fine if I returned to Gibberagee. I considered that I had no alternative but to return to complete NEFA's audit to fully document the breaches.

It took almost 2 years for the EPA to respond, in January 2019 issuing the Forestry Corporation with 2 Official Cautions for failing to appropriately mark the exclusion zones for Narrow-leaved Melichrus and roading and logging within them, and 2 Formal Warnings for failing to select appropriate recruitment trees and causing unnecessary damage to 23 retained hollow-bearing and recruitment trees.

Fisheries NSW refused to take any action for the Purple Spotted Gudgeon in Gibberagee State Forest, and 41 other compartments identified by NEFA, on the grounds that the habitat maps they provided to the Forestry Corporation on 19 July 2016, specifically in response to a request during preparation of their Gibberagee 117 and 118 harvesting plan, "had caused ambiguity". The mapping is very clear as are the Forestry Corporation's legal responsibilities to take it into account. A response to NEFA's complaints over Gibberagee was prepared by Fisheries in October 2017 but never provided to us, despite numerous requests.