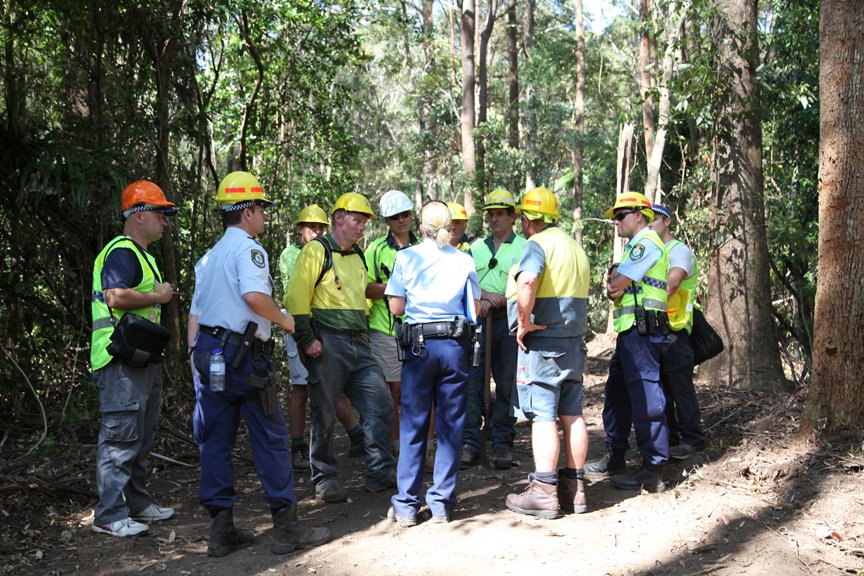 Police and forestry discussing tactics to facilitate the illegal logging.

NEFA has described the Environment Protection Authority's (EPA's) issuing of $11,000 fines to the Forestry Corporation for knowingly and illegally constructing a track through the habitats of the Koala and a endangered plant on private land at Whian Whian as pathetic.

NEFA spokesperson, Dailan Pugh, said it is reprehensible that these flagrant breaches occurred after NEFA had requested a Stop Work Order from the EPA and after the EPA had inspected the area. The breaches are of the worst kind because they were done intentionally while under the EPA's supervision.

"The offences were committed 2 years ago, so the EPA's response has been extremely slow. We reported numerous other flagrant breaches that the EPA has done nothing about,

"The Forestry Corporation should have been prosecuted because such slow and pathetic responses by the EPA are clearly not working".

"The Minister for the Environment, Mark Speakman, must ensure there is an independent investigation into the committing of these offences by the Forestry Corporation and the ineffective handling of them by the EPA” Mr. Pugh said.

Track construction through (or at least near) the exclusion zone for the Koala high use feed tree which they were fined for - the police oversee the illegal works.

"On the13 September 2013, on a private at Whian Whian (adjoining Nightcap NP), NEFA identified to the Forestry Corporation that they had constructed a road through what should have been a 20m buffer for a Koala High Use Tree. On the 17 September 2013 we undertook fauna surveys which proved the presence of Marbled Frogmouth, Sooty Owl and Masked Owl on the property, forcing the Forestry Corporation to implement the rules to increase stream buffers and protect more old trees..

"In a brief survey on the 22 September 2013, NEFA found 8 Koala high use trees, 3 endangered Slender Marsdenias, over 60 vulnerable Red Bopple Nuts and 10 vulnerable Arrow-head Vines on the route of a proposed Forestry Corporation road. We asked the EPA to implement a Stop Work Order to stop a road being pushed through.

"NEFA went back and audited the operation after the logging was finished and found the Forestry Corporation constructed the track within what should have been 20m exclusion zones for 3 Koala high use trees, 7 Endangered Slender Marsdenia, 12 vulnerable Arrow-head Vines, and 8 vulnerable Red Bopple Nuts, most of which had been identified and tagged with pink tape prior to track construction. When we last looked, two Slender Marsdenia were killed, one injured and 3 were missing, and one Arrow-head Vine had died.

"That this occurred 3 days after NEFA had asked the EPA for a stop work order to allow a proper survey to be undertaken, and occurred under the EPA's supervision, is reprehensible. That the Forestry Corporation knowingly constructed the track through exclusion areas for so many species is outrageous.

"It is almost 2 years since the offences occurred, and the EPA has only now taken any action.

"For the EPA to only issue fines for two of 30 intentional threatened species breaches is pathetic. The EPA has only issued one penalty notice for intentionally breaching a koala exclusion zone and one for intentionally breaching an exclusion zone around the endangered vine Slender Marsdenia, fining the Forestry Corporation $5,500 for each offence. The Forestry Corporation committed these offences deliberately and should have been prosecuted.

"The EPA took no action for the flagrant and intentional intrusions into exclusion zones for the threatened Arrow-head Vine because they couldn't be bothered doing the surveys to work out whether more than 10% of the population had been affected. This excuse doesn't work for the Red Bopple Nut, and we are yet to find out how they justify doing nothing for it.

"Despite the track being pushed through a group of 3 Slender Marsdenia, killing 2 and injuring one, not far from where NEFA had reported it, the EPA refused to take any action for the Forestry Corporation killing and damaging the plants because the EPA could not prove that Forestry did it knowingly.

NEFA identified another 5 Koala high use trees and 49 threatened plants elsewhere on the property that had forestry operations undertaken within what should have been 20 metre exclusion zones around them. The EPA let them off these because they weren't found by NEFA until after they had been interfered with, and thus it couldn't be proven they had knowingly bulldozed roads through their exclusion zones.

"The EPA also warned the Forestry Corporation for damaging, and leaving debris stacked around, trees required to be retained as habitat trees.

"At the behest of the Forestry Corporation, the EPA also had the Office of Environment and Heritage (OEH) remap rainforest on the property, in the process mysteriously reallocating 2.5 hectares of the Federally Critically Endangered Lowland Rainforest of Subtropical Australia to either the logging area or cleared land. The Forestry Corporation then constructed a road though these areas. The EPA reputedly found the EPA had done nothing wrong.

"The Whian Whian breaches occurred a year after we had caught the same forestry crew logging Koala high use areas in Royal Camp State Forest. Six months ago we again caught the same crew constructing a track through 8 vulnerable Onion Cedars in Cherry Tree State Forest, and only a month ago we found that they had again constructed a track through Koala High use trees in Cherry Tree State Forest. It is evident that the EPA's slow responses and pathetic fines are totally ineffective.

"The EPA have yet to respond to NEFAs substantive complaints - they say they will do so in a few days. At the moment our only official response has been the media release (which was sent to NEFA and the media at the same time) and some vague responses over the phone" Mr. Pugh said.