The North East Forest Alliance has demanded a public apology from the Environment Protection Agency after it accused NEFA of making misleading statements regarding a recent EPA study that found that logging is bad for Koalas.

In its media release of 14 September NEFA claimed:
Outcomes of a recent study by the Environmental Protection Authority prove that Koalas have a significant preference for larger trees and more mature forest, with Koala populations found to be collapsing in recently logged areas.

“The Government now has the evidence that logging is bad for Koalas and needs to take immediate action to identify and protect the remaining Koala colonies that are in public forests threatened by logging. Every day that the Forestry Corporation is allowed to go on logging Koala's preferred feed trees brings them closer to extinction. It has to stop now. We call on Premier Mike Baird to urgently intervene to save NSW's Koalas",

The EPA responded to media that NEFA's claims contained "some misleading information":

NEFA spokesperson, Dailan Pugh, said he categorically rejects the EPA's assertion that any of his comments are misleading.

"I am simply emphasizing the findings that they would rather ignore. They should be alarmed, as their findings show that their current logging prescriptions are not working.

"This as a cover-up of the worst kind, the EPA are trying to sweep their own evidence under the carpet. 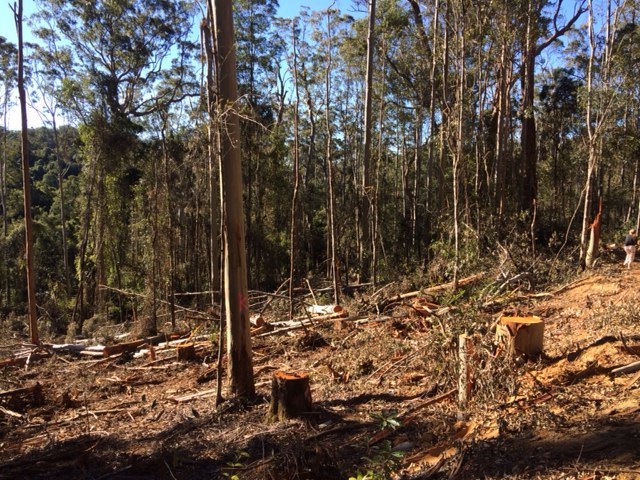 The EPA summarise in their report identifying the factors affecting Koala distribution: "Areas of higher activity positively correlated with greater abundance and diversity of local koala feed trees, trees and forest structure of a more mature size class, and areas of least disturbance".

"In plain words the EPA's findings are that logging in Koala habitat is bad for Koalas. The EPA can not turn a blind eye to the evidence from their own study.

"They should be assessing and monitoring logging impacts on Koalas, not finding out inadvertently and then pretending the results don't exist by insinuating I am lying about them" Mr. Pugh said.

"The EPA's results did show that two of the best predictors of Koala use were larger trees and more mature forest. As has been found elsewhere, Koalas are clearly choosing the larger older trees, these are the same mature trees being targeted in logging. The EPA found few Koalas in regrowth.

"The EPA did surmise that Koala populations appear to be collapsing in recently logged forest. The EPA found few Koalas in what should have been high quality habitat in Clouds Creek and Maria River State Forests, noting that based on their results "in combination with the degree of habitat disturbance (logging and fire) identified in the field, it would be reasonable to conclude that the high activity areas were sink habitats, as less than 30% total habitat utilisation was recorded, in addition to <5% of resident habitat area recorded".

"And that Carwong State Forest had the highest occupancy because "Having both wildfire and multiple recent logging events absent for approximately 20 years, appears to correlate with overall highest occupancy compared with other pilot areas"

"The EPA need to now publicly apologize for claiming that I misrepresented their report. They need to come clean with what their study actually found regarding Koala's preferences and logging, and tell the public what they are going to do about it" Mr. Pugh said.