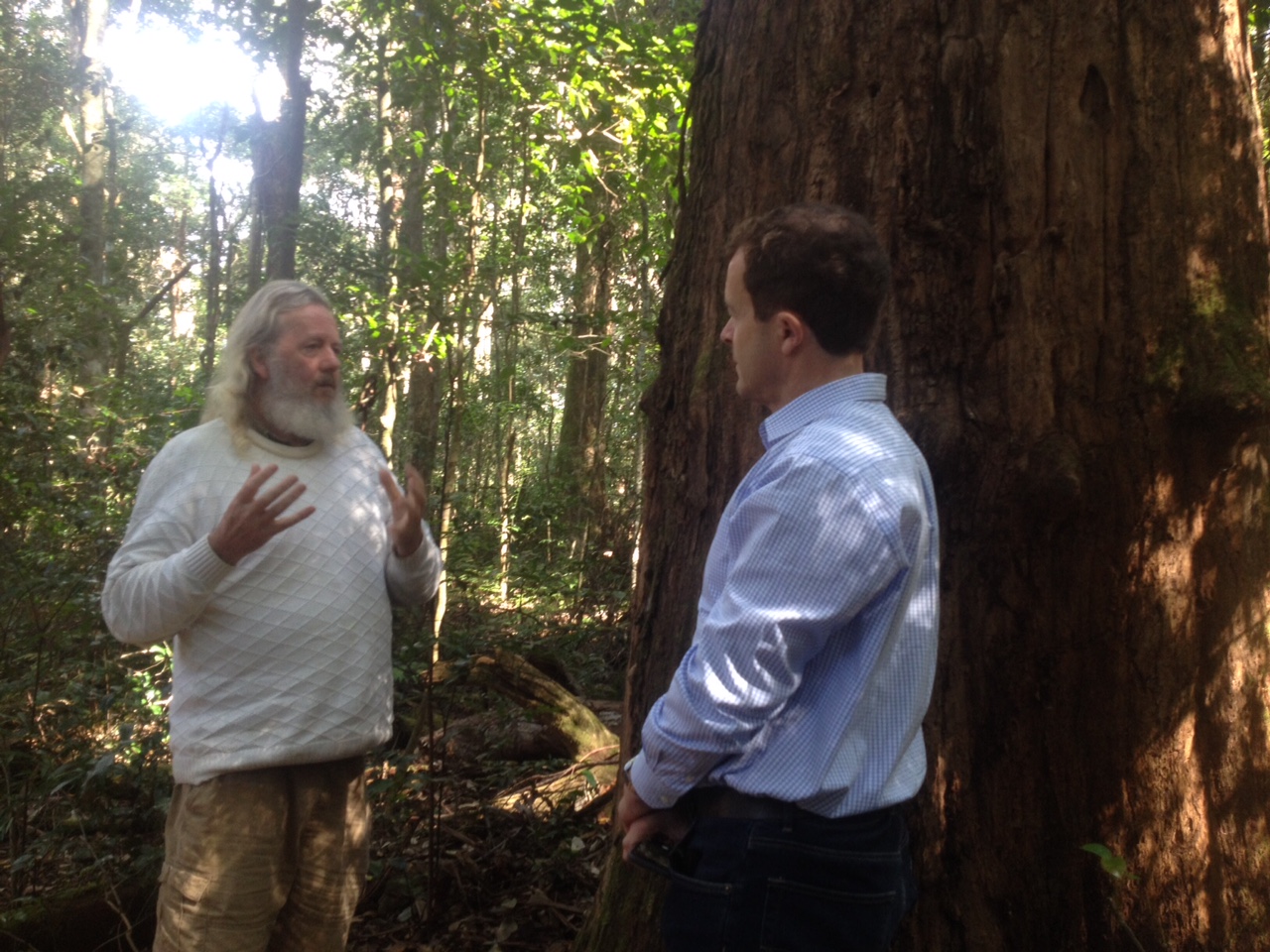 "We welcomed the opportunity provided by the Minister to show him the problems firsthand.  He listened, engaged with the issues, and asked pertinent questions. We hope we gave him a lot to think about in his new portfolio" said Susie Russell of the North Coast Environment Council

"We urged the Minister to recognise that the highest public interest values of our public native forests are the provision of clean water to farms and towns, as habitat for threatened plants and animals, and the trees ability to breathe in and store ever increasing volumes of carbon as they age.  Forests provide one means of removing significant volumes of carbon dioxide from the atmosphere and mitigating the impacts of climate change, provided we stop cutting them down" Ms Russell said.

"At Royal Camp State Forest we showed the Minister one of the Koala High Use Areas we stopped the Forestry Corporation illegally logging in 2012, explained to him the importance of protecting such core Koala habitat, and asked him to intervene to stop the EPA removing this essential protection" said Dailan Pugh of the North East Forest Alliance.

"On the Richmond Range we showed him how widespread and serious the growing problem of logging dieback is. Given the seriousness of the problem and the EPA's refusal to deal with it, we asked him to intervene to stop the Forestry Corporation logging affected forests and spreading lantana and dieback", Mr. Pugh said.

"We welcome the assurance the Minister has given that the proposed steep land cable logging trial is not anticipated to be included in the new logging rules being drawn up. We thank him for this. It rules out this damaging practice in the short term and is a victory for commonsense, " said Lyn Orrego of Nambucca Valley Conservation Association.

"We asked him to go further and stop the new extreme logging proposal by the Forestry Corporation and EPA to rezone 150,000 hectares of public forests from Grafton to Taree into an intensive logging zone where clearfells of 50-60 hectares, with only a few trees required to be protected, will be allowed with a return time of 7-10 years, turning these public native forests into pseudo-plantations and devastating the wildlife ", she said.

"The Minister was shown case studies that clearly demonstrate the EPA’s proposed new logging rules will dramatically reduce the protection of streams and water quality, and weaken or remove the protection for many Threatened species", said John Corkill of the North East Forest Alliance.

"We made it clear that Government attempts to find the timber to fill grossly over-committed and clearly unsustainable wood supply agreements were probably futile, and would inevitably lead to increased pressure to wind back environmental protection measures. We need him to stand strong against that pressure ", Mr Corkill said.