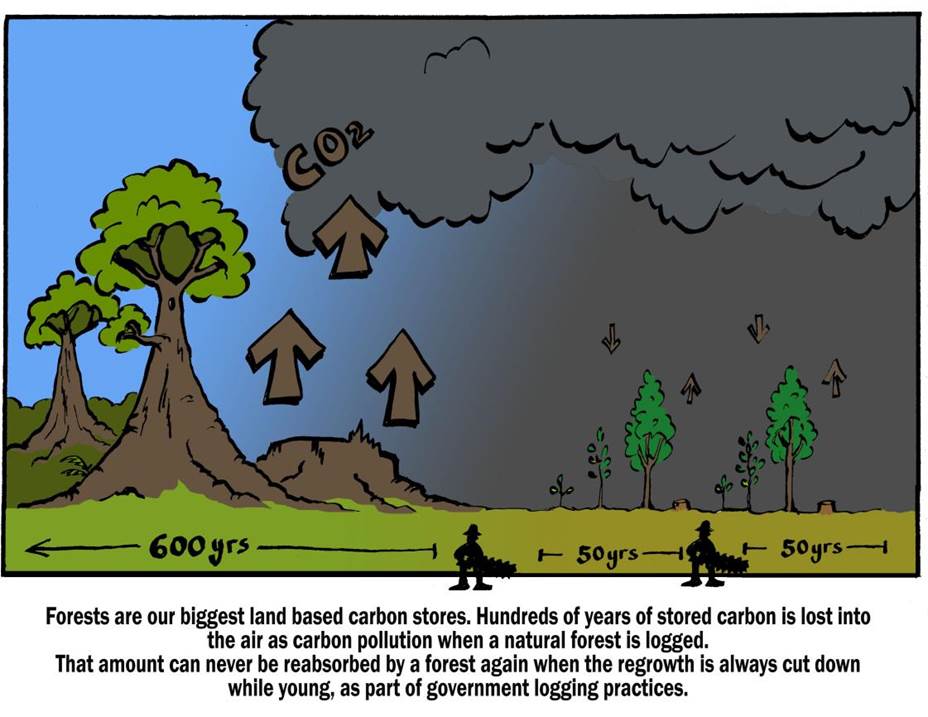 Ending logging of our public forests is part of the solution

With the climate emergency rapidly escalating, north coast conservation groups are calling on the NSW and Commonwealth Governments to immediately end the logging of public forests to allow them to maximise their carbon sequestration and storage.

"The world's carbon emissions and temperatures have both hit record highs in 2015, and south eastern Australia experienced an unprecedented heatwave at the start of Autumn. It is time to stop fiddling and take the urgent action needed to avert the worst of this developing crisis", said NEFA spokesperson Dailan Pugh.

"As evidenced by the current bleaching of the Great Barrier Reef, our natural ecosystems are already collapsing. Our civilisation depends on stable temperatures, as they grow more erratic and extreme agriculture and fisheries will increasingly fail.

"The 2015 IUCN Paris Accord committed countries to an urgent pathway of holding the increase in the global average temperature to well below 2 °C above pre-industrial levels and pursuing efforts to limit the temperature increase to 1.5°C.

"Last year saw the world's temperature increase reached 1oC above pre-industrial levels. In February the world experienced a warming of 1.5 degrees. This could soon be the norm, and we are likely to surpass a 2 degree warming by the middle of this century, if we don't now take urgent action to reduce our emissions", Mr. Pugh said.

"Forests are the lungs of the earth. They breath in our carbon emissions and store it in their tissues, while giving us oxygen in return. Despite our abuse of them, worldwide they absorb a third of the carbon we emit each year", said NCEC Vice President Susie Russell.

"The older a tree gets the more carbon they take in and store. When we cut them down we not only release their stored carbon, but also their ability to continue to take up and store carbon.

"Logging has reduced the carbon carrying capacity of our forests by 40 to 60%1. We need to take urgent action to curtail our emissions by increasing the carbon take-up and carbon storage in our forests.

"Ending the logging of our public forests is part of the solution to global warming, it is one response to the climate emergency that we can take now that might gain us a little more time to redress our other emission sources.", Ms Russell said.
....

The carbon stock of forests subject to commercial logging, and of monoculture plantations in particular, will always be significantly less on average (~40 to 60 per cent depending on the intensity of land use and forest type) than the carbon stock of natural, undisturbed forests.
...
The majority of biomass carbon in natural forests resides in the woody biomass of large old trees. Commercial logging changes the age structure of forests so that the average age of trees is much younger. The result is a significant (more than 40 per cent) reduction in the long-term average standing stock of biomass carbon compared with an unlogged forest. ..