Clearing Our Rainfall Away

Vegetation creates rain. That's one of the conclusions of a comprehensive review of more than 150 scientific papers on land-clearing and rainfall, conducted by Dailan Pugh of the North East Forest Alliance. Clearing Our Rainfall Away, released today, summarises the evidence of how land-clearing affects rainfall, and the impacts that land-clearing has had on Australia's climate. 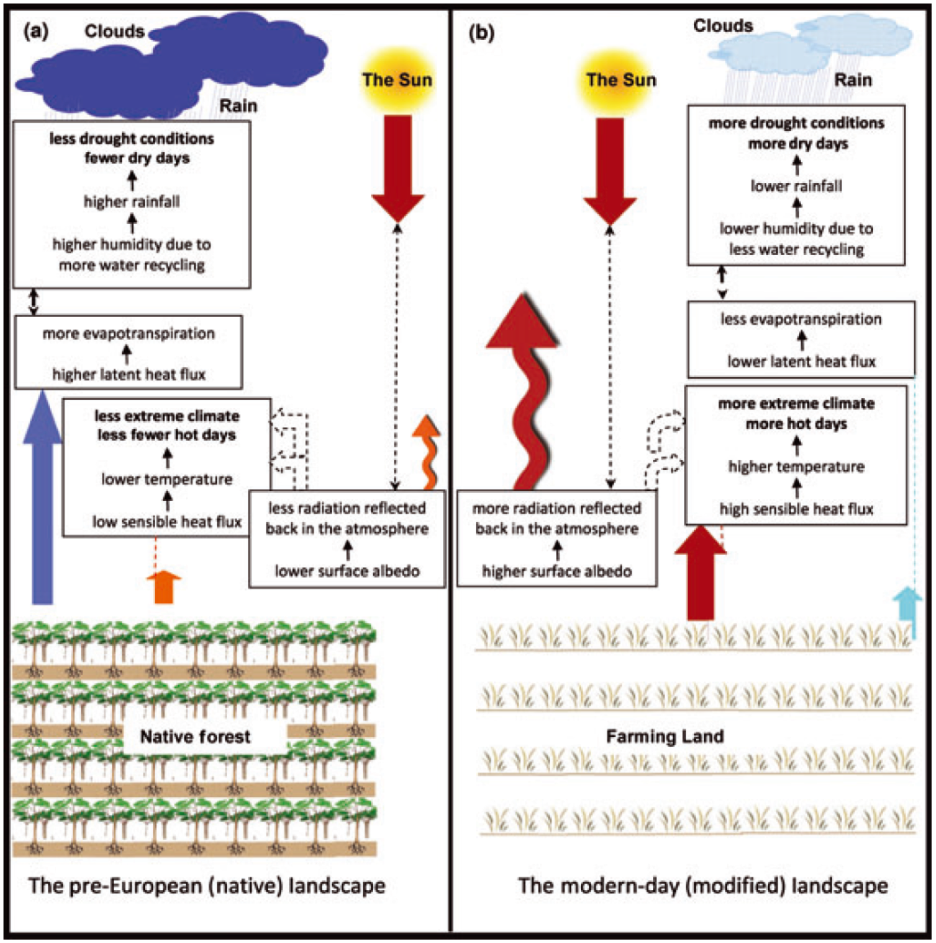 “Climate change results from many human activities, one of those is land-clearing and deforestation”, Mr Pugh said. “The evidence is overwhelming: clearing native vegetation reduces rainfall, increases temperatures and intensifies droughts. With NSW experiencing record-breaking temperatures it's time for the Governments to end the policies that are contributing to it.

"Vegetation does not just respond to rainfall, it actively generates its own. It recycles water from the soil back into the atmosphere through transpiration; creates the updrafts that facilitate condensation as the warm air rises and cools; creates pressure gradients that draw moist air in from afar; and, just to be sure, releases the atmospheric particles which are the nuclei around which raindrops form.

"The transpiration of vegetation also results in evaporative cooling whereby the surface heat is transferred to the atmosphere in water vapour. The resultant clouds also help shade and cool the surface.

"It has been estimated that since European settlement, land-clearing in eastern Australia has directly resulted in an average summer rainfall decrease of 4-12% and a warming of around 0.4-2C” he said.

Review author, Dailan Pugh said, "While rising carbon dioxide emissions are responsible for much of our climate woe, they are not the whole problem. Overwhelming evidence from around the world shows land-clearing has directly caused a significant reduction in regional rainfalls and an increase in land temperatures.

"These impacts have been compounded by the release of CO2stored in trees which adds to the 'greenhouse effect', with land-clearing contributing around a third of the world's CO2 emissions in the past two centuries.

"With temperatures and droughts increasing in severity we can not afford to add to our woes. Removing deep-rooted forests and woodlands has also resulted in rising water-tables and brought long-buried saline ground-waters towards the surface. 7.5 million hectares of NSW's agricultural lands are considered at risk of dryland salinity.

"It is important that Premier Berejiklian recognises that if she approves the clearing of our forests and woodlands, she is approving rainfall reductions, temperature increases, and making more farmland unproductive.

"The Premier must take action to rein in the worse aspects of Baird's climate vandalism" Mr. Pugh said.