Cherry Tree Logging must stop until outstanding issues are addressed

MEDIA RELEASE 15 November 2021
Logging is underway in compartments 3&4 of Cherry Tree State Forest, on the Richmond Range near Mallanganee, with an action planned by Forest Defence NSW this morning.

With logging underway in Cherry Tree State Forest, NEFA have written to the EPA and Minister Kean asking for it to be stopped until outstanding issues are dealt with. It is particularly concerning that buffers are not being applied to rainforest given that it is known that logging significantly increases the risk and intensity of fires, and 30% of north-east NSW’s rainforests were burnt in the 2019/20 wildfires, NEFA spokesperson Dailan Pugh said.
“As Koalas are present in the area there needs to be surveys to identify core Koala habitat for protection. 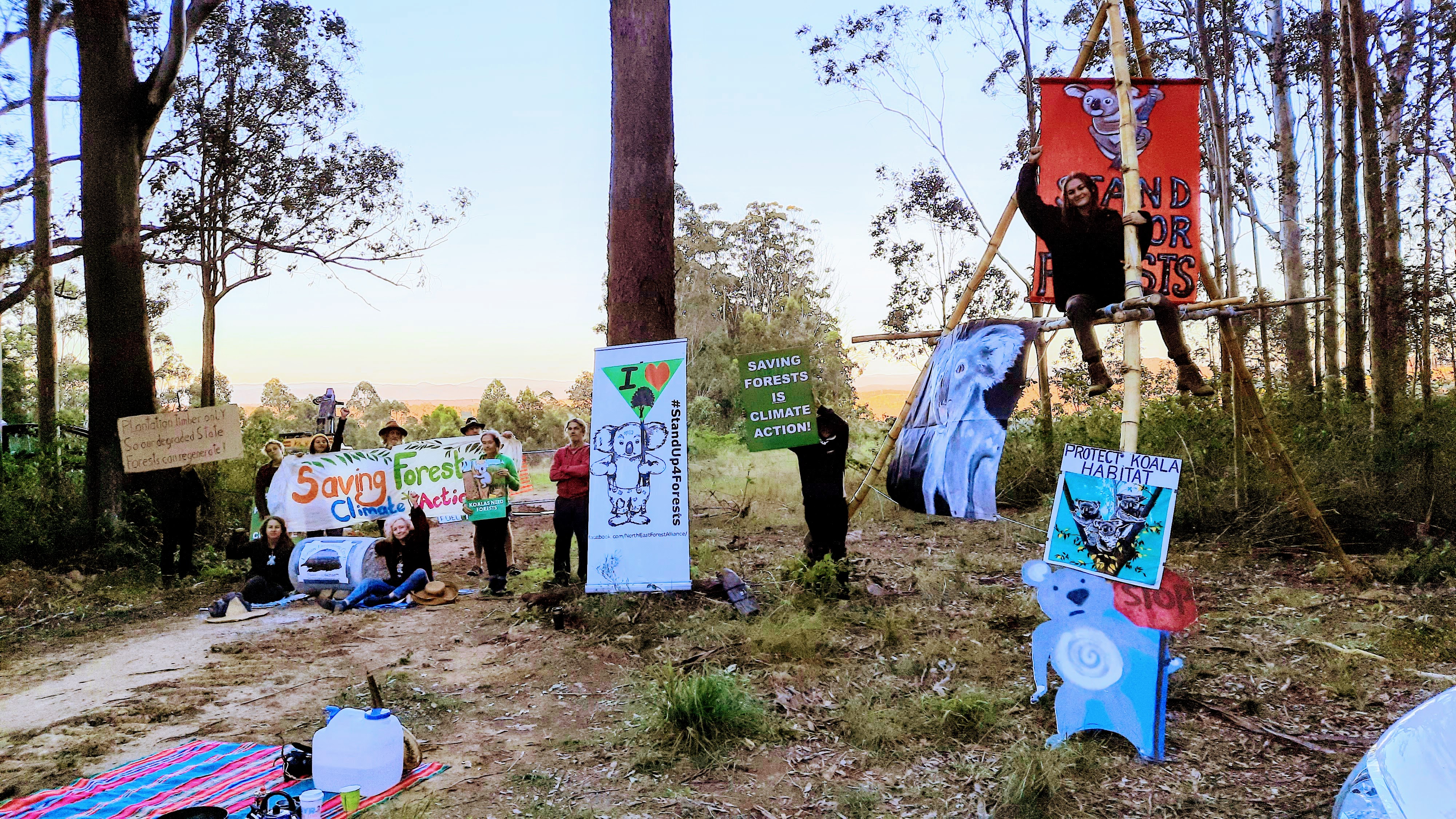 “The Richmond Range represents the divide between the Richmond and Clarence Rivers, with most of the logging area draining into the Richmond River. Protection of these headwater streams on steep country is particularly important to the health of these rivers. Regrettably the stream buffers have been significantly reduced, increasing logging impacts on water quality.
“NEFA audited logging of the northern part of this planning area in 2015 and identified widespread and systematic breaches of the logging rules, from which the EPA identified 66 cases of non-compliance with legal requirements for threatened plants, rainforest, habitat trees, tracks, streams and threatened fauna.
“The outcome was that the EPA issued 2 Penalty Infringement Notices ($2,000 fine), corrective action requests, and 47 Official Cautions for non-compliances. This is nothing, particularly as they got away scot free for many.
“We are now asking for compensatory habitat protection for the illegal logging of some 95 hectares of Endangered Ecological Communities and hundreds of hollow-bearing trees, as well as excessive canopy removal in habitat of the Endangered Black-striped Wallaby,“ Mr. Pugh said.
NEFA’s report requests that before logging proceeds:
• The Border Ranges Rainforest Biodiversity Management Plan needs to be complied with
• Wide buffers need to be placed around rainforest and related vegetation
• Canopy retention needs to be increased to mitigate impacts on the Black-striped Wallaby and to compensate for the past excessive logging
• Compensatory areas need to be retained for the 91.3 ha of the EEC Grey Box-Grey Gum Wet Sclerophyll Forest illegally logged
• All hollow-bearing trees need to be retained to compensate for the hundreds illegally logged
• The identified Wildlife Habitat Clumps need to be redesigned to maximise inclusion of the best habitat and remove overlaps with existing exclusions and heavily logged areas
• Areas susceptible to Bell Miner Associated Dieback need to be identified and excluded from logging.
NEFA has asked that all logging be stopped until these issues are fully dealt with.