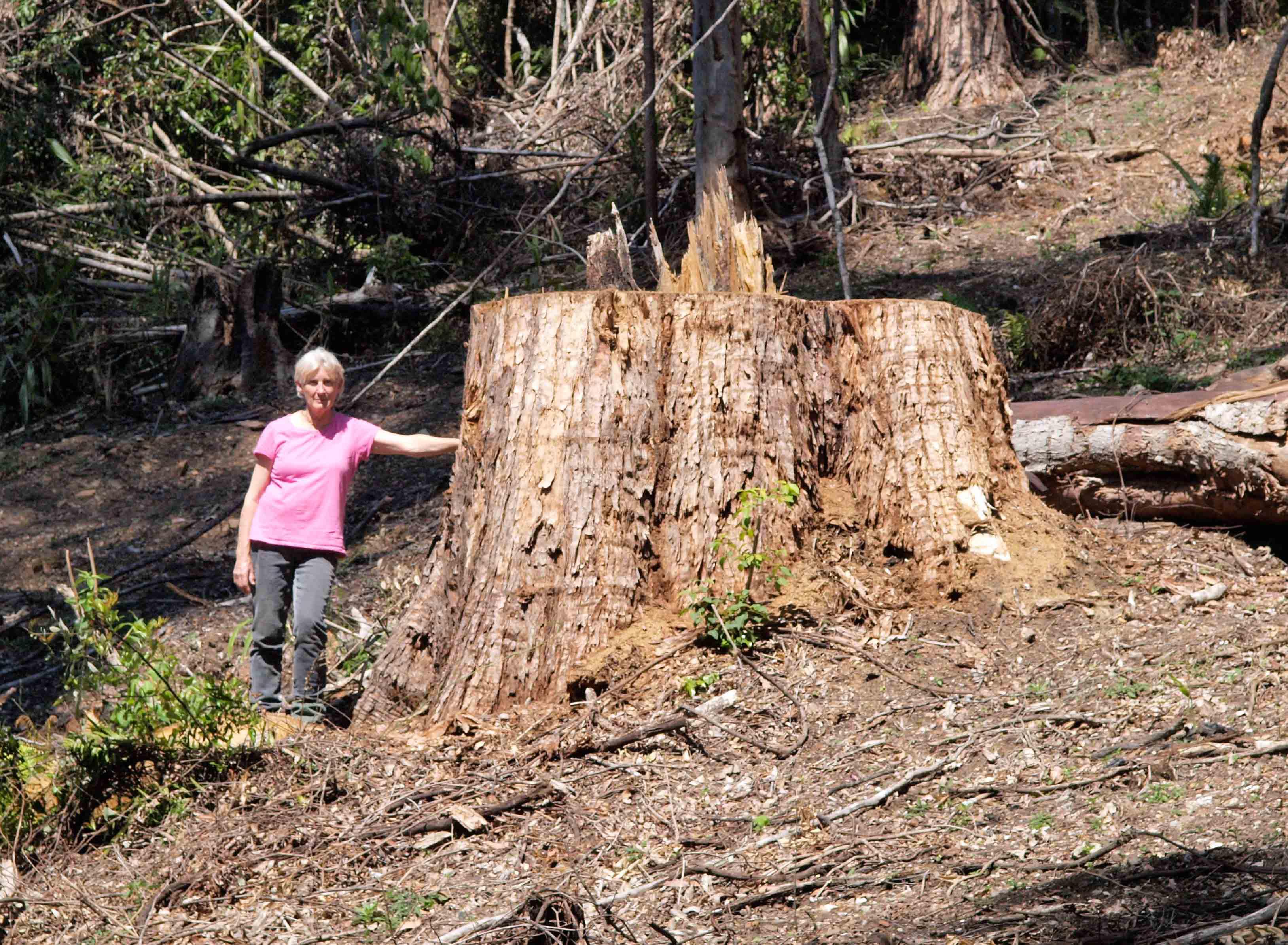 “It is shocking and appalling that trees such as this one pictured whose stump measured 2.4 metres diameter, are still being cut down in our public native forests,” said Lyn Orrego from the Nambucca Valley Conservation Association, who, last weekend, found more than a dozen large stumps, from recently felled forest giants, in the Oakes State Forest west of Bowraville.

“There should be a size limit on tree felling. It takes a tree about a year to put on a centimetre of girth. These trees like would have been standing in the forest before Europeans set foot in Australia. They would be hundreds of years old and are part of our natural heritage. Their scarcity and value makes them national treasures,” she said.

“A visitor to a State Forest these days will see mainly very young trees, 30 years old or less. The Government logging agency is converting our once majestic and highly biodiverse public native forest into something more like a plantation or a crop,“ she said.

“The Forestry Commission or Corporation as it is now known, has been around for 100 years. It can't lay claim to growing any trees larger than a metre in diameter. All trees greater than a metre in diameter should be left for the future. These trees have life-spans of many hundreds of years. A 100cm diameter tree is only just reaching maturity. It is still centuries away from reaching its potential as wildlife habitat. Our short-sighted political timelines are unable to cope with the life-cycle of something older than a goldfish!” said Susie Russell of the North East Forest Alliance (NEFA)

“It was like being in Borneo or back in the 1990’s to see these hundreds of years old trees cut down,” said Joe Sparks from NEFA who lead the inspection at Oakes SF.

“These old trees have been stable storehouses of carbon for 300 or 400 years. Old trees store 4 times the amount of carbon as young trees, helping to mitigate climate change. As well as the loss of these trees, now fire will be let into this area and Bell Minor Associated Dieback will take hold. Huge old trees are more valuable to us in the ground and alive,” he said.

“These trees would have been full of hollows and supported the many species of wildlife that use and need tree hollows. In NSW at least 46 mammals, 81 birds, 31 reptiles and 16 frogs are reliant on tree hollows for shelter and nests. Of these, 40 species are listed as threatened on Schedule 1 and Schedule 2 of the Threatened Species Conservation Act (NSW Scientific Committee 2007),” said Dailan Pugh of NEFA.

“It is not until eucalypts are over 100 years old before they start developing the hollows vital as dens and nests for native species and over 200 years before they develop the large hollows needed by larger species,” he said.

“Our public forests have been denuded of these vital trees. Any tree over 100 years old needs to be protected, let alone ones like these which are probably over 400 years old. It is reprehensible that in this day and age the Baird Government is still allowing our natural heritage to be destroyed,” he said.

“We believe the public has a right to know what’s going on in their public native forests and voice their opinion. Many are likely to be shocked like we were,” said Lyn Orrego.

“We will be writing to Premier Baird and asking for his intervention. Years ago the Environment Protection Authority recommended that all giant trees should be protected. We must protect the old trees that are left. They are of immeasurable value,” she said.

Animal species that use tree hollows include most possums and gliders, numerous bats, most owls, Australian Owlet-nightjar, tree creepers, tree martins, all cockatoos, most parrots, some kestrels and falcons, Laughing Kookaburras, some kingfishers, Dollarbirds and various lizards and snakes.

The NSW Scientific Committee (2007) has identified Loss of Hollow-bearing Trees as a Key Threatening Process. The maintenance of large old hollow-bearing trees in perpetuity is the single most important requirement for the survival of the numerous animal species that rely on their hollows for denning, nesting or roosting.