Forestry operations have a profound impact on native plants and animals. Natural forests are normally multiaged, with large numbers of big old trees providing hollows for nesting and denning, along with abundant nectar and seed resources. They also contain mature and young trees providing for succession as trees senesce and die. The understorey may naturally be open and grassy or more often is comprised of a wide diversity of understorey plants providing nesting sites, foraging habitat, and essential food resources for a suite of species. Even the dead trees and logs are critical habitat for numerous species.

In general, forestry aims to remove the mature trees for timber and get rid of the big old trees and unsuitable species that suppress regrowth of commercial species. Understorey and logs are just impediments. The outcomes are often a mess due to loss of critical habitat trees, early removal of potential sawlogs, excessive damage to retrained trees, poor regeneration, escaped burn-offs, significant soil erosion, stream pollution and massive weed invasion.

Plants are killed by logging, trampling with machinery, burning and being smothered by weeds. Animals are directly killed in falling trees and by being crushed in logs and burrows, and slowly by loss of dens, nest sites, territories and essential food resources.

Of those 175 animal species identified as being of particular conservation concern in north-east NSW, a total of 7 mammals (excluding bats), 27 bats, 31 birds, 16 frogs, 5 turtles, 15 lizards and 8 snakes were identified as being specifically vulnerable to logging, with many of these species, and a number of others, also vulnerable to the associated fire regimes, hydrological changes, stream pollution and weed invasions. For 41 of these 109 species logging is identified as a primary (number 1) threat. (see Threatened Species).

In a natural forest rainfall is mostly intercepted by the canopy or absorbed by the ground cover. Subsurface flows of excess waters then generate streamflows. In logging operations the reduced canopy and widespread soil compaction and baring result in overland flows that transport large volumes of sediments and nutrients directly into streams where they have significant long-term impacts on stream biota (see Logging impacts on streams). Impacts on stream flows are also long lived as the regrowth forest has high water demands and there is less surplus for streams (see How Forests Regulate Streamflows).

It is obvious that if we want to limit the impacts of logging on native species, soils and streams then we need to restrict the scale and location of activities we allow to occur. Regulation of forestry activities was found to be necessary because of the Forestry Corporation’s repeated failures to voluntarily minimise their impacts (see The Battle to Protect Threatened Species, The Battle to Protect Soils and Streams).

Forestry operations on public lands in north east NSW are governed by the Integrated Forestry Operations Approvals (IFOA) for Upper North East Region and Lower North East Region, and the licences they contain. These are referred to as Environmental Protection Licence (EPL), Threatened Species Licence (TSL) and Fisheries Licence (FL). Together with various clauses of the IFOA these constitute the regulatory regime applied to forestry operations on the public’s state forest lands in north-east NSW

The Integrated Forestry Operations Approval is one of the means by which NSW implements obligations and undertakings given in the joint NSW and Commonwealth North East NSW Regional Forest Agreement (Cl 36,48) and is the principal vehicle by which Environment and Heritage Values that are impracticable to include in reserves can be considered. The IFOA, along with the CAR reserve system, is required to provide for the protection of rare or threatened flora and fauna species and ecological communities (Cl 60). A key requirement is to monitor and review the sustainability of forest management practices (ie Cl 53), which includes the IFOA (Cl 52).

While we now have a comprehensive regulatory process for the management of State forests, the prescriptions are inadequate because they are the result of numerous political compromises with expert opinions and evidence often ignored. Neither have they been subject to monitoring and expert review. Even the minimalist prescriptions now applied are routinely flouted by the Forestry Corporation. (see Protecting Exclusion Areas, Doing Surveys, Protecting Threatened Fish, Protecting Habitat Trees).

There are a number of species that are threatened at a Federal level and should be taken into account before the Commonwealth Government signs off on Regional Forest Agreements. This is another aspect of government process that is a dismal failure.

For more information on other aspects of logging prescriptions see the following links:

The Battle to Protect Threatened Species

The Battle to Protect Soils and Streams

The Need for Stream Buffers

The Importance of Old trees

What is it about forests that you value?

State Forests are part of the public estate effectively controlled by the will of the people of NSW.. Along with National Parks, Nature Reserves and State Conservation Areas, and numerous schools, hospitals, sporting, camping and recreation areas, State forests are Crown lands. State forests are public lands that have been allocated for timber production under the control of the Forestry Corporation.

The community has the right and responsibility to ensure that State forests are managed in the community’s best interests. The community has repeatedly identified that they place a very high value on native forests for wildlife, beauty, water and recreation, compared to a relatively low value for logging, mining and shooting. For example the Community Attitude survey for the Upper North East Comprehensive Regional Assessment (McGregor et. al. 1997a) established that the priorities respondents gave to “various activities with relation to public forests” were;

Exploitative uses of public lands received a lot less support (timber production 24%, woodchipping 7% and mining 13%), with the highest opposition being to mining (72%), hunting (70%) and woodchipping (65%).

In response to the question “what is it about forests that you value?”, those values ranked highest were aesthetic (80%), conservation reasons (46%), spiritual (25%), intergenerational equity (14%) and recreation (10%) as compared to relatively low values for economic/employment (6%) and economic goods and use (5%).

While State Forests have been allocated for timber production, the Forestry Act 2012 requires that they be managed in compliance with the principles of ecologically sustainable development, with timber supply environmentally sustainable, and with regard to the interests of the community.

Large areas of State Forests are still required to be added to the reserve system to satisfy the national reserve targets and protect viable fauna populations (see CAR Reserves), logging is being undertaken at an unsustainable rate (see Over-logging ), and they are not being managed in an ecologically sustainable manner (see Bell Miner Associated Dieback), (Logging Prescriptions). NEFA therefore maintains that they are not being managed in the community’s best interests.

Forests are key components of the earth's water cycle. Forests do not just respond to rainfall, they actively generate their own. They recycle water from the soil back into the atmosphere by transpiration, create the updrafts that facilitate condensation as the warm air rises and cools, create pressure gradients that draw moist air in from afar, and, just to be sure, release the atmospheric particles which are the nuclei around which raindrops form.

Forests have been described as 'biotic pumps' driving regional rainfall because their high rates of transpiration return large volumes of moisture to the atmosphere and suck in moisture laden air from afar.

While most of our rain originates from evaporation of the oceans, it is estimated that 40% of the rain that falls on land comes from evaporation from the land and, most importantly, from transpiration by vegetation. Recycled water vapour becomes increasingly important for inland rainfall.

Having created and attracted the water vapour, the plants then make it rain. Plants emit volatile organic compounds (VOCs), such as plant scents and the blue haze characteristic of eucalypt forests. They play an important role in communication between plants, and messages from plants to animals, and also between plants and moisture-laden air. They oxidise in the air to form the cloud condensation nuclei around which waterdrops form.

The transpiration of vegetation also results in evaporative cooling whereby the surface heat is transferred to the atmosphere in water vapour. The resultant clouds also help shade and cool the surface.

Forests store water in their tissues, in the soil amongst their roots and in the protected microclimate beneath their canopies, releasing it over time to the atmosphere by evapotranspiration and to streams through the groundwater system. Forests are a vital component of our hydrological cycle and due to their roles in attracting and recycling rainfall, reducing temperatures and regulating runoff they provide immense economic benefits to human societies. Their importance will become increasingly significant as climate change results in more erratic rainfalls and intense dry periods.

There is abundant scientific evidence that deforestation and degradation of vegetation causes significant reductions in rainfall by:

The overwhelming evidence from around the world is that land-clearing has directly caused a significant reduction in regional rainfalls and an increase in land temperatures (See: Clearing Our Rainfall Away). These impacts have been compounded through the release of stored CO2, with land clearing contributing around a third of our CO2 emissions in the past two centuries.

Across drier areas of Australia the removal of deep rooted forests and woodlands has caused water tables to rise, allowing long-buried saline ground-waters to rise towards the surface, with the resultant dryland salinity affecting millions of hectares.

Logging has the opposite effect, with increased transpiration by the regrowth lowering water tables. The generalised pattern following logging of an oldgrowth forest is for there to be an initial increase in runoff peaking after 1 or 2 years and persisting for a few years. Water yields then begin to decline below that of the oldgrowth as the regrowth can consume 50% more water than oldgrowth. Water yields are likely to reach a minimum after 20-30 years before slowly increasing towards pre-logging levels in line with forest maturity. It can take over 150 years to restore the original water yields. (See: How Forests Regulate Streamflows)

Reductions in water yields are dependent upon the rainfall and the amount of water used by the vegetation. When rainfall is low the regrowth can consume most of the water, leaving little surplus for streams. In areas experiencing high rainfalls regrowth has been found to depress annual water yields by some 50%, though with low rainfalls there may be little water left for streams surplus to the requirements of the regrowth.

With declining rainfalls due to clearing, the increased demand for water by the regrowth can dry catchments, cause water stress and kill trees.

Allowing regrowth forests to mature results in significantly increased water yields to surrounding streams and dams. Water yields will go on increasing for many decades. The increase in water yields from maturing forests represents a significant economic benefit to all downstream users, particularly during dry periods. 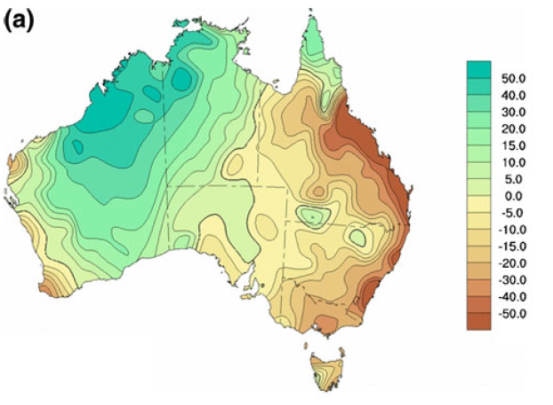