No to burning forests for dirty power at Redbank!

The imminent rebooting of the mothballed Redbank Power Station with wood (biomass) from NSW’s native forests will make it Australia’s most polluting power station and an existential threat to the future of our children and wildlife.

Hunter Energy is currently seeking expressions of interest for timber from north of Grafton, West of Dubbo and South of Batemans Bay to fuel their Redbank Power Station, with plans to restart the facility in mid 2021 fed by native forests to make it one of world’s ten biggest biomass power plants.

The community needs to urgently speak up to stop the NSW and Commonwealth Governments from allowing this environmental disaster.

Burning trees to power Redbank Coal Station is an existential threat to our future.

It's a climate nightmare.

It's polluting and expensive.

It undermines the climate mitigation potential of forests.

It threatens our future forests, water security and struggling wildlife.

Allocations of Public Resources for Logging

These forests belong to the people of NSW and are managed by the Forestry Corporation of NSW (AKA Forestry Commission, State Forests and Forests NSW). In the 1970’s the intent was to cut over the forests of the coastal plain and dramatically reduce logging until the regrowth matured in 2020-2040, keeping up sawlog supplies by one-off unsustainable logging of oldgrowth forest in steeper country and on the tablelands until pine plantations matured in 2010.

In the 1980’s the coastal forests began to be over-logged to maintain revenue and pacify sawmillers, while community alarm at the depletion of oldgrowth forests initiated campaigns to stop the liquidation logging of oldgrowth. The 1990’s saw a greater emphasis on reducing logging to a sustainable level while creating an adequate reserve system encompassing most oldgrowth forest and wilderness. The reserve system was doubled and most oldgrowth and wilderness protected on public lands.

In the 2000’s the State and Commonwealth Governments ignored evidence that yields were over-estimated and issued Wood Supply Agreements to millers for free at intentionally unsustainable levels. Since then NSW taxpayers have spent tens of millions of dollars helping mills modernise, paying compensation to millers for inability to supply, buying back commitments from millers for timber that never existed, buying timber from private land to meet commitments, and establishing plantations. Despite this sawlogs from public native forests continued to decline and the predictions were that the 2020’s will see massive reductions. (see The Battle for Sustainable Yields is Lost).

In 2014 the yield predictions for the next 100 years were inexplicably doubled. Previously predicted dramatic declines in yields in 2023 and again in 2065 were converted into increasing yields over time. How the parameters underlying the modelling were changed to achieve this have not been identified, though it is partially attributable to increasing logging intensity and treating native forests like plantations. Despite this dramatic turn-around the NSW Government separated the yields from native forests and hardwood plantations to change a modelled resource surplus into a deficit to justify major wind-backs of environmental constraints, and the opening up of oldgrowth and rainforest protected in the reserve system for logging. (see 2018 Timber Review).

Export woodchipping began from north-east NSW in the 1980s and because of the massive volumes, low manufacturing coasts and quick returns proved to be very profitable for millers. It was stopped in 2013 due to competition from overseas eucalypt plantations and an inability to get independent environmental certification for north east NSWs logging. Now there is the even bigger threat of burning native forests in furnaces for electricity (see A History of Export Woodchipping from North East NSW). In 2018 the Government offered new commitments of low quality logs to overseas buyers in 10 year agreements, including reassigning all hardwood plantation resources as low quality for export. (see 2018 Timber Review).

The Minister for the Environment, Mark Speakman, has let us know that the steep land logging trial proposed to be held in the upper catchment of the Nambucca, Kalang, Bellinger and Orara Rivers is now “not anticipated to be in”  the new logging rules when they come out for public comment in October. He did say he “couldn’t rule something out forever” but this is great news in the short term. The local community stood up and said NO to such an  extreme proposal. Had they got away with it, Forestry Corporation planned to extend steep slope cable logging across thousands of hectares of the steep upper catchment areas. It would have ruined our beautiful mountain vistas that are backdrops to our coastal towns, dried up our water catchments that supply farms and towns, destroyed habitat of our forest dependent threatened species and destroyed the opportunity for mature trees to contribute to carbon storage to mitigate against climate change. So thanks to everyone who helped out with the campaign and spreading the word. It’s a victory for common sense.

However the bad news is that we now know Forestry Corporation are planning to introduce massive clearfells, 50 hectares in size, across many of the coastal forests between Grafton and Taree and increase the intensity of logging nearly everywhere else. See our page Forest Slaughter.

NB:  NEFA's research into the proposed steep slope cable logging and the reason NEFA lobbied the government to not go ahead with this proposal can be read below.

Right now, the NSW State Government is planning to begin cable logging of steep forested slopes. Areas that are hard to get to and play a vital role in holding our catchments together are now under immediate threat.

The intensity of logging in the first area to be subject to the cable logging treatment can be seen here. Each orange line is a cable site. 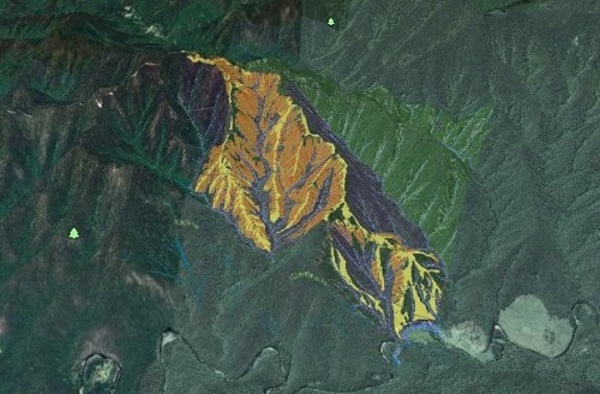 This will then be done across the areas outlined in red (see image below). They form an important part of the Nambucca, Bellinger, Coffs Harbour, Taylor's Arm, Kalang, Never Never and Orara River catchments.

After this no forested part of the steep land of the north coast will be safe. 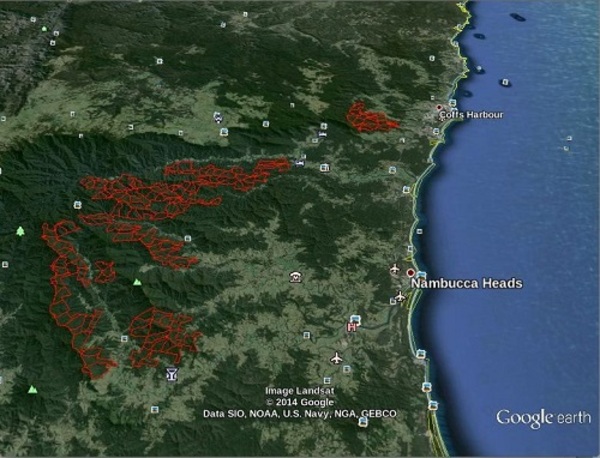 Together we can stop this madness. Sign-up to volunteer.

In 1992 NEFA stopped a relatively small logging operation on extremely steep slopes at Mount Killekrankie in Oakes SF that was causing horrendous erosion, with over 88,000 tonnes of soil being mobilised into the headwaters of the Bellinger River. It was this case that proved the need for legally enforceable prescriptions for forestry and resulted in logging being prohibited on the steepest and most erodible slopes. (see The Folly of Logging on Steep Erodible Slopes)

Now that the NSW Government is becoming desperate for sawlogs to satisfy its Wood Supply Agreements it wants to over-turn the prohibition of logging on extremely steep-lands and introduce cable logging into NSW (see The Battle for Sustainable Yields is Lost).

In 2014 a NSW Government Steering Committee tasked with identifying means of making up for declining yields, proposed logging blackbutt forest on excessively steep slopes in the headwaters of the Taylors Arm, Nambucca, Kalang, Bellinger, Never Never and Orara Rivers. It was considered that with the use of cable-logging around 50,000 m3 per year of sawlogs could be obtained for around 6-7 years from slopes over 30o.

As part of their remake of the logging rules the EPA subsequently announced “FCNSW will conduct a small scale trial to determine which techniques can be used to augment ground-based methods on steep country in coastal NSW”. As well as allowing the Forestry Corporation to “trial” cable logging, the EPA intend to “reduce the prescriptive nature” of Environment Protection Licence and allow clearfelling.

While this may buy a few years of continued over-logging, there is nothing sustainable about it. For a few years worth of logging they will leave behind degraded landscapes and the community will have to bear the costs of the ongoing landslips, massive erosion, increased flooding, reduced dry-season stream flows and the pollution and siltation of their creeks and rivers. If this goes ahead it will just be the start, no forested part of the steep land of the north coast will be safe.