NEFA makes submissions to the NSW Government on a wide range of issues affecting our forests. These detailed submissions can be found using the hyperlinks to the relevant topics below.

Here is a short extract from our submission. Prepared by Dailan Pugh, February 2021

So here we are, in Koala’s darkest hour we are back to discussing how disgracefully the Government intended to treat them, while they explore other avenues to remove protections and hasten their extinction...

For the future of Koalas, NEFA hopes that you can make a difference in this life and death struggle. We hope this submission will help.

NEFA considers that the intent of SEPP 44 to identify and protect “core Koala habitat” was the right way to go. We have already wasted 25 years and thousands of Koalas’ lives as the Government has dithered and actively frustrated this intent. It is more urgent than ever that we identify and protect “core Koala habitat”, and prepare Comprehensive Koala Plans of Management (CKPoMs), though Koalas will be extinct in the wild before we achieve this if we continue in this way.

We urgently need to change tack if we want to save Koalas. Most importantly the NSW Government needs to take on the task of undertaking a systematic scientific process to map Koala habitat within each Area of Regional Koala Significance (ARKS), with the output being the identification of feed trees, key Koala colonies, grades of Koala habitat, habitat links, drought refuges and long-term climate change refugia across all tenures within each ARKS. This then can be used to prepare KPoMs and feed into other processes to protect Koalas.

As identified by the Environmental Defenders Office:
Frankly, we can’t wait another decade to debate the wording of a new koala policy or guideline. We need to address the fact that our laws currently allow clearing of important koala habitat.

This Bill was the exact opposite of the law reform that is needed to save NSW koalas from extinction. And the decision to revert back to the former SEPP 44 is also a significant backwards step. 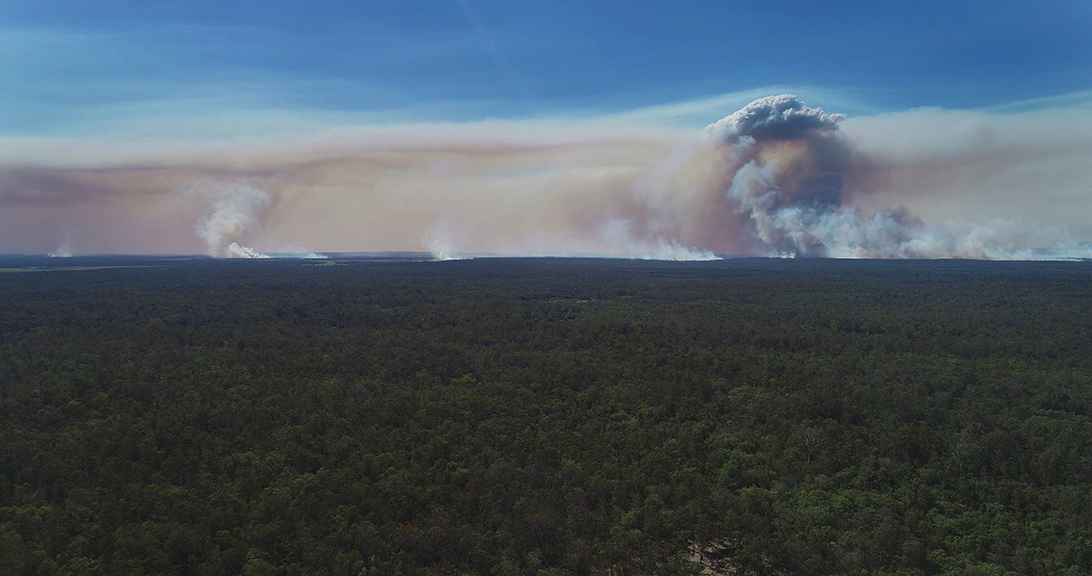 Due to climate heating bushfires are becoming more frequent and intense. As evidenced in 2019-20, droughts and heatwaves are drying forests out and making them more flammable. The fires were of unprecedented extent burning through 2.4 million hectares of north-east NSW with unprecedented intensity, as evidenced by the burning of 35% of rainforests. The fires likely killed in the order of 350 million vertebrates, leaving many species teetering on the brink of extinction. The situation is dire and urgent action is needed to stop further climatic deterioration and increase the resilience of forests.

To redress the unfolding calamity we need to move towards net zero emissions of CO2 as soon as possible, though we cannot limit climate heating to less than 1.5o or 2o C unless our forests remove excess carbon from the atmosphere and store it in their wood and soils. Clearing of native vegetation must cease, right now. Stoping logging of public native forests is a logical next step as the regenerating forests will store ever increasing volumes of carbon as they age and fulfil the essential role of immediately reducing atmospheric carbon - stoping logging of north-east NSW's State Forests will sequester 6.5% of NSW's annual emissions. By 2050 we need to have undertaken extensive regeneration and reforestation to draw down more atmospheric carbon. Huge gains can be made by rewarding landholders for the volumes of carbon they store in soils and trees.

We need our forests more than ever, not just because of their intrinsic worth and beauty, but for the ecosystem services they provide us, such as generating rainfall, cooling the land, calming winds, regulating streamflows, and capturing and storing the carbon we emit. With forests increasingly stressed by droughts and fires they are losing their ability to mop up our excess carbon - there is no time to waste if we want to avoid the worst of the climate catastrophe.

It is evident that Private Native Forestry has never been undertaken on an Ecologically Sustainable basis because of political interventions, lack of political will, opposition from some landholders, failure to adopt best practices, refusal to adopt science-based prescriptions and consider relevant environmental research, refusal to require pre-logging surveys and apply mitigation measures for threatened species, inadequate retention and recruitment of old trees, failure to undertake assessments to identify ecosystems and features requiring protection, inadequate protection of streams and riparian buffers, failure to take into account forest degradation and require rehabilitation, failure to monitor the effectiveness of prescriptions and apply adaptive management, failure to undertake effective regulation, secrecy surrounding PNF operations, and contempt for genuine community concerns.

You can visit the LLS Government site here: https://www.lls.nsw.gov.au/sustainable-land-management/pnforestry/private-native-forestry-review-2018

See also the report immediately below which formed the basis of a submission to a Commonwealth Senate Inquiry into Threatened Species.

Photo: Dailan Pugh giving evidence to the Inquiry into the EPA's regulation of forestry practices at Royal Camp State Forest

North East Forest Alliance Submission to the Federal Inquiry into: The effectiveness of threatened species and ecological communities' protection in Australia, Prepared by Dailan Pugh for NEFA, December 2012

North East Forest Alliance, November 2014
It is proposed to create the 2,100 ha Sandy Creek National Park in the headwaters of the Richmond River south-west of Casino. The proposal is comprised of two parts, including part of Royal Camp State Forest (compartments 13-16, 1,500ha) and the whole of Carwong State Forest (600ha). These forests are primarily proposed for protection for their exceptional importance for Koala conservation in an area where populations are in decline and in danger of extinction.

The North East Forest Alliance was formed in 1989 as an alliance of groups and individuals from throughout north-east NSW, with the principal aims of protecting rainforest, oldgrowth, wilderness and threatened species. NEFA has pursued these goals through forest blockades, rallies, court cases, submissions, lobbying, and protracted negotiations.

After our second blockade of North Washpool and a court case we stopped logging of mapped rainforest on public lands in 1990. We managed to get rainforest more fully mapped and protected during forest negotiations from 1995-98. (see A Short History of Reserves in North East NSW)

After a blockade and court case over Chaelundi in 1990, and promises of more to come, we forced the NSW Government to establish moratorium over some 180,000 ha of oldgrowth forest until EISs were prepared. We managed to get oldgrowth mapped during forest negotiations from 1995-98, with mapped “high conservation value” oldgrowth protected. In 2003 we had protection extended to cover all mapped oldgrowth stands over 10ha on public land. Wilderness on public land was also protected as part of that process. (see A Short History of Reserves in North East NSW)

After our second and biggest blockade at Chaelundi in 1991, and another court case, we were successful in getting NSW’s first threatened species legislation, the Endangered Fauna (Interim Protection) Act. It took many more blockades, submissions and negotiations to get requirements for fauna and flora surveys and a comprehensive set of prescriptions for public land in 1996-9. Unfortunately they remain inadequate and poorly applied. (see The Battle to Protect Threatened Species)

It took NEFA’s 1992 blockade of a logging operation at Killekrankie in the New England Wilderness to halt horrendous logging and roadworks that were causing massive erosion, and a threatened court case, to force the Government to agree to adopt Pollution Control Licences for State Forests’ operations. Though a comprehensive suite of prescriptions to reduce erosion and protect streams wasn’t finally applied on public lands until 1996-9. Inadequate as they are, the Forestry Corporation was successful in having over 90% of their operations exempted in 2004. (see The Battle to Protect Soils and Streams)

For north east NSW, NEFA were also instrumental in getting the area of national parks and other conservation reserves increased from 968,335ha in 1989 to 2,033,227ha in 2011, an increase of 1,064,892 ha or 110%, with most of this being protected over the period 1995 to 2004. In addition to this, 311,615 ha of State Forest was incorporated into Forest Management Zones (FMZ 1, 2, and 3A) and Special Management Zones which are counted as contributing to the reserve system and protected from logging, bringing the total protected from logging to 1,376,507ha. The proportion of north-east NSW’s land area in reserves has increased from 10% in 1989 to 21% in 2011, with an additional 3% protected from logging in management zones. (see A Short History of Reserves in North East NSW)

There is still a lot to do, north east NSW still does not have an adequate reserve system, attempts to implement ecologically sustainable forestry have failed, forests are being over-logged, weeds and dieback are being spread through our forests, and their carbon stocks depleted.